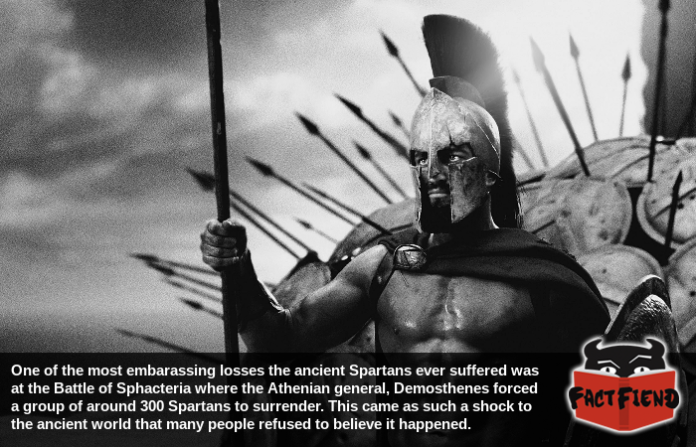 If history books and the documentary 300 has taught us anything it’s that there were few problems in the ancient Greek world that couldn’t be solved with a judicious application of Spartan men. Something the Athenian general, Demosthenes apparently wasn’t aware of when he made 300 of them surrender, much to the shock of pretty much the entire known world at the time.

Now this particular story from history took place in 485 BC just after the Battle of Pylos, which saw a group of just over 300 Spartans stranded on the tiny island of Sphacteria. A strategic stronghold that the Athenians really wanted to get their hands on, the problem was that no matter how tightly they blockaded the island they simply couldn’t stop Spartan supplies from getting through. As a result it quickly became clear to the Athenians that if they wanted to take the island, they’d have to defeat the fucking Spartans in one-on-one combat.

For anyone unfamiliar with the Spartan’s, their prowess on the battlefield was the stuff of legend and it was largely thought that the Spartan army was unbeatable due to the fact they were trained to fight almost from birth and famously fought to the last man and would never, ever give up in battle. 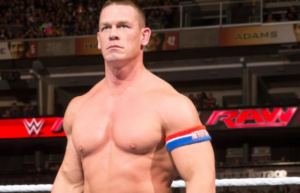 In addition Spartan soldiers fought in heavy bronze armour with large shields designed to protect both themselves and the man next to them. This all combined to make even a small number of Spartans a force to be reckoned with, which is presumably why Demosthenes was shitting bricks when he was informed that he had to figure out a way to beat 300 of them. You know, roughly the same amount that famously held off the entire Persian army for like 3 days a few centuries prior.

Demosthenes’ solution to this problem was to simply pepper the Spartans with slings and arrows from an elevated position, in effect annoying them into submission and neutering the one thing that made Spartan’s so fucking terrifying. Their prowess in close-quarters combat. Now it’s worth noting that a fully armoured Spartan hoplite was basically invincible from a conventional standpoint and even a hailstorm of arrows wasn’t something that could reliably injure a spartan, let alone kill one. However, the sheer amount of projectiles did eventually wear the Spartans down enough to make them agree to a parlay.

In the ensuing discussion the Spartans agreed to surrender after being told by a Spartan envoy that they were free to make their own decision about surrendering, so long as they didn’t dishonour themselves. A deliberately vague instruction born from a contradictory desire of Spartan officials to avoid losing any more soldiers whilst saving face, since being unstoppable badasses in combat was kind of their whole deal and one of the reasons they commanded so much respect in the ancient world despite being a tiny city state with comparatively few citizens or soldiers. 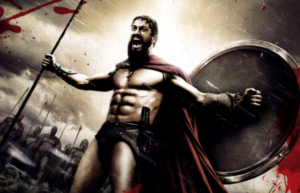 Moving on, according to history books Demosthenes ended up capturing almost the entire force of 300 Spartan soldiers he’d been sent to fight, with the Spartans losing only 30 men. To put in perspective how ridiculous this was consider that Demosthenes had over a 1000 men and had been shooting arrows at the completely cut off and exposed Spartan army for an entire day. Meaning that although the Spartans lost, they still put up a pretty good fight.

The capture of the Spartans is said to have sent shockwaves across the ancient world and many ancient Greeks genuinely didn’t believe that anyone had managed to capture a single Spartan let alone several hundred of them. Not that this bother the Athenians who used the Spartan captives as a bargaining chip to end skirmishes with the Spartans for almost half a decade, that’s how valuable Sparta considered its soldiers to be.

Speaking of the captured soldiers, they reportedly didn’t let being prisoners dull their legendarily sharp with. For example, immediately after the battle an Athenian soldier quipped to one of the captives that their arrows must have killed all of the brave Spartans, prompting an annoyed Spartan grunt to spit back “The arrow would be quite a weapon, if it only killed the brave“. Huh, we guess you had to be there.