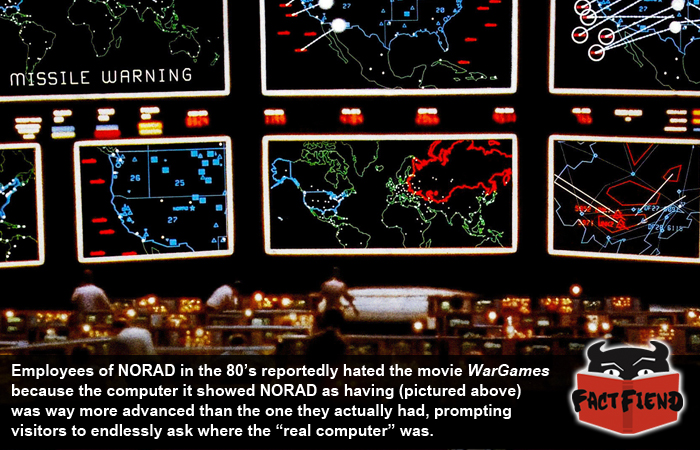 WarGames is science fiction film from the 80’s about hacking and nuclear war that was released in a time when people thought computers were magic and hackers were wizards, a far cry from today when we know that computers are magic. The film famously features a scene set at NORAD, a scene that ended up haunting the people who actually worked at NORAD for years.

If you’ve never seen the film, the cliff notes version is that a young computer nerd played by Matthew Broderick inadvertently hacks into a NORAD supercomputer designed to run simulations in the event of world-ending nuclear war thinking it’s a video game, we’ve all been there. Suffice to say, shenanigans are had and everyone learns a valuable lesson about the futility of war after Ferris Bueller almost starts World War 3 but saves the day by making the computer play Tic Tac Toe against itself until it gets bored.

Now that image is from one of several scenes set inside of the North American Aerospace Defense Command or NORAD, a place that actually exists in real life, monitoring American airspace for potential threats and occasionally Santa, 365 days a year. Given the sensitive nature of NORAD’s work, the US government unsurprisingly told the people making WarGames that they weren’t allowed to photograph or film NORAD’s actual command centre, because come on. So instead the filmmakers decided to just wing it and built what they assumed a place tasked with tracking missiles and terroristy looking birds flying through American airspace would look like. The end result was a set that looked like something Tony Stark’s dad would have had sex inside of. 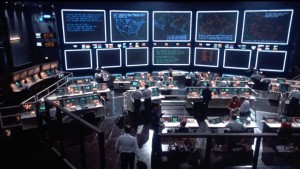 The set ended up costing over a million dollars to create, making it one of the most expensive film sets ever constructed at that point and it relied on state of the art projection technology to make it look as if the big-ass TV screens you can see at the back of the room were displaying images in real time. The only problem though was that NORAD’s actual command centre in the 80’s looked nothing like that. The filmmakers had made the reasonable assumption that such an integral aspect of America’s defence grid would feature cutting edge technology and created their fake command centre with that in mind describing it as “NORAD’s wet dream of itself“.

Okay to be fair that picture is from 2005 (NORAD are still kind of funny about people taking photos) but we think how how shitty it seems compared to the one from WarGames is quite telling and you better believe people told NORAD this in the 80’s. More specifically during tours of the Cheyenne Mountain facility in the 80’s, guests and dignitaries upon seeing the actual command centre would remark that it was far less impressive than the one in WarGames usually before asking the guide if they could go see the “real” computer.

The question was asked so much and annoyed the people working their to such an extent that it was one of the reasons that the entire Cheyenne Mountain command centre was overhauled to improve its aesthetic and functionality. Presumably it finally dawned on someone working there relying on technology from a time when it was okay to backhand your wife for being too uppity to potentially try and track nuclear missiles and jet planes was a bad idea.