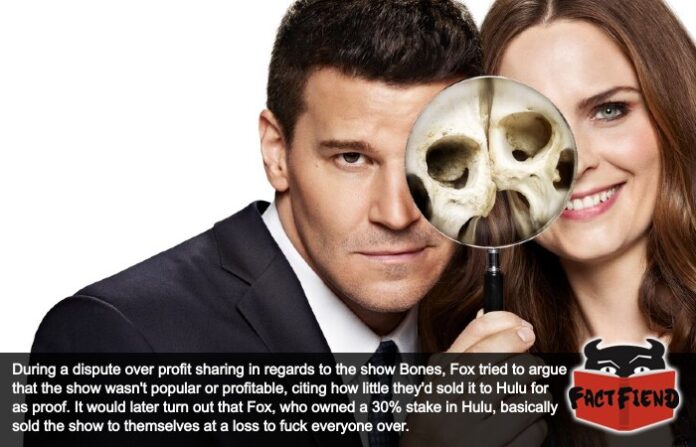 Bones is a police procedural about a bone-obsessed woman who teams up with a former-sniper turned FBI agent to solve bone-based crimes using her encyclopaedic knowledge of skeletons and his ability to shoot people in the penis from very far away. The show is also notable for being sold by Fox, to itself, to avoid paying anyone involved any royalties.

You see, at some point during the production run of Bones several members of the principal cast and a couple of its executive producers inked a deal with the show’s distributors, 20th Century Fox, to receive a percentage of the show’s profits. A pretty common occurrence that almost never goes well due to something known as Hollywood Accounting. Essentially a way of cooking the books on a project to ensure it never technically turns a profit so that studios don’t have to actually pay out on any of these deals.

In specific regards to Bones, the deal everyone agreed to was pretty simple and would have seen the show’s stars – David Boreanaz and Emily Deschanel – earning a not insignificant amount of money from stuff like licensing deals. Or it would have if Fox hadn’t spent years arguing that the show they renewed for 12 seasons straight and spent $2 million on per episode was a catastrophic, horrible failure nobody watched.

In fact, Fox tried arguing that Bones was “a middling show with middling ratings” despite them, again, renewing it for 12 seasons and spending tens of thousands of dollars shooting promo images of the cast posing with skeletons. Like seriously, there are so many shots of David Boreanaz and Emily Deschanel posing with skeletons. 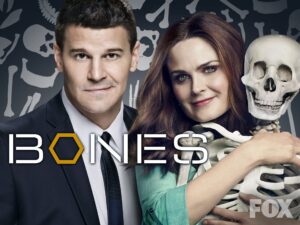 Anyway, the show’s cast and producers got kind of pissed off when Fox sold the distribution rights to Bones to the streaming service Hulu for basically fuck all considering it’s popularity. A deal Fox defended by reiterating that the show was a ratings disaster and nobody wanted to watch it. For context, when the show was airing on Hulu 2 million people a week tuned in to get, bonely. 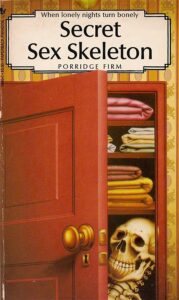 Eventually everyone involved got kind of pissed off with Fox and decided to sue the ever-loving fuck out of them, claiming that Fox was obviously trying to weasel out of paying them royalties they were owed by giving the show to Hulu for less than it was worth. Pointing out amongst other things that the entire show only made about $1 million in ad revenue on Hulu when a single season made 70 times that on TV. A claim Fox countered by saying that they actually totally fought super hard to get everyone as much as possible, you guys.

An argument that immediately fell apart the moment lawyers arguing the case pointed out that Fox owned a 30% stake in Hulu and as a result, were basically arguing with themselves about how much money to pay, well, themselves. With the smoking gun being that an executive from Fox signed both sides of the deal.

When asked to explain this obvious conflict of interest, an executive from Fox played dumb and claimed that they had no idea how it happened. Which, as you might imagine, courts didn’t buy, slapping the studio with a $179 million fine. Because fuck them.