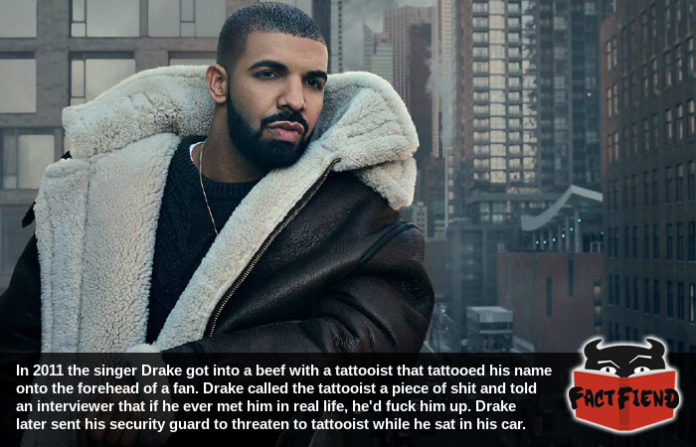 In 2013, during an interview with GQ magazine, Drake tried to explain to an interviewer that one of the single biggest misconception people had about him is that he’s a huge asshole. A claim it’s hard to take seriously considering he once made his security guard threaten some random tattooist he was having a feud with because he’s a raging, petty douche-canoe.

The origins of this now legendary rap beef can be traced back to 2011 when a female fan of Drake’s swaggered into a Los Angeles tattoo parlour and asked tattooist, Kevin Campbell to scar the word “DRAKE” right onto her fucking forehead. Campbell, after asking the young woman three times to confirm that she absolutely wanted Drake’s name on her forehead for the rest of her natural life, sighed and got right to work.

After sharing the above image on social media, Campbell was bombarded with hatemail from people calling him every name under the sun. A fact Campbell shrugged off in an interview with Vice, explaining that the tattoo shop was right in the middle of Crip territory and that he was all too familiar with people asking for shitty, life-ruining tattoos. In fact, Campbell would later note that his only regret about the whole thing was that he had no idea who Drake was when he did the tattoo. Campbell later explained that he figured the tattoo was a gang sign or something and he was actually kind of disheartened to learn it was the name of, in his own words, “some goofnugget R&B dude”. 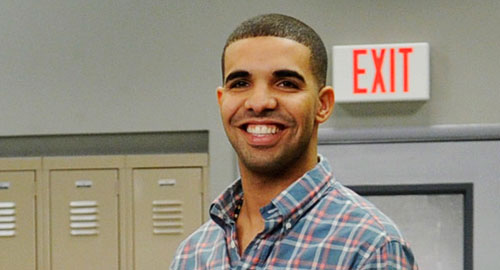 Drake took particular exception to this, telling an interviewer who asked him about it that Campbell was a dickhole who should lose his job, you know, even though he gave the woman exactly what she asked for. Without prompting Drake then went on a huge diatribe about Campbell claiming, amongst other things, that if he ever met Campbell in person he’d fuck him up. Campbell to his credit wasn’t particularly bothered about this, laughing the whole thing off and calling Drake a shitbeard who was too much of a pussy to do anything about it. Something to only proved to enrage Drake further.

Keen to prove how tough he was and put Campbell in his place, Drake flew straight to LA to confront him, by proxy. You see, rather than walk into Campbell’s shop and actually act on his promise to fuck him the fuck up, Drake sent in his biggest security guard to threaten him instead. According to Campbell Drake spent the entirety of this “confrontation” sat in his car on his phone sheepishly trying to avoid eye contact while his security guard yelled at him. When asked if he felt their beef was settled by MTV, Campbell explained that it was, largely because there’s no way Drake could have made himself look any worse.