This article has now been converted to video format using black magic and an underpaid intern. The original article the video is based on can be found below if you’d rather not see someone in an orange T-shirt gush about a video game where you can punch demons in half.

DOOM for the uninitiated is considered by many to be the granddaddy of the first person shooter video games and it was so popular in the early 90’s that it was literally installed on more PCs than Windows 95. Oh and it was also partially inspired Tom Cruise being a cocky asshole in a movie about pool hustling.

The story goes that early in DOOM’s development sometime in 1992, John Carmack, one of the game’s developers began thinking of a name that would symbolise both what the game represented and what they as a company stood for. After racking his brains for a few minutes, Carmack remembered a scene from a film he’d seen recently called The Color of Money, in which Tom Cruise is in a pool hall carrying a box and is asked by a patron what’s inside of it, prompting him to respond, “Doom” while one of the biggest shit-eating grins you’ve ever seen slowly spreads across his face. 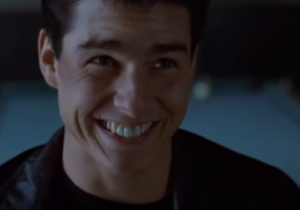 Cruise then proceeds to absolutely fucking demolish the guy at pool, cleaning up the entire table with a series of effortless one-handed shots that he celebrates by spinning the pool cue around like a total dipshit, which of course someone later edited to make it look like Cruise was actually swinging around a lightsaber so he looks like a drunk hipster Jedi.

Carmack would later note that Cruise’s cock-sure attitude and the resulting “carnage” he caused when he metaphorically inserted 13 pool cues into that guy’s asshole in front of a bar full of people who thought he was the best player there, was how he saw the video game they were developing. More specifically, he saw the game as being like the “doom” Cruise alluded to prior to methodically rubbing his balls all over everything in the room, feeling that the gaming industry simply wasn’t ready for their game, similar to how the patrons of that bar weren’t ready for Tom Cruise’s pool-playing prowess and girth. As a result, Carmack decided to call the game, DOOM as a subtle nod to this scene.

Handily, the name DOOM also fit rather well with the game’s overall theme of punching the endless hordes of Hell so hard in the dick they explode, which was nice.

If this article wasn’t badass or Tom Cruise-y enough for you, why not kill two birds with one ninja star and read about that time Tom Cruise asked a stuntman to try and stab him in the face.