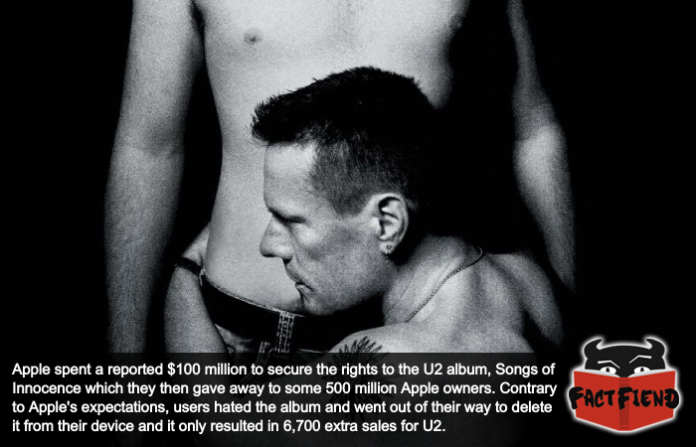 As a company the Apple Corporation boast some of the most, shall we say, impassioned fans and it wields more power and influence than a Jedi with a gun. None of which helped the company in 2014 when it sunk millions into an advertising campaign that ended up selling a frankly embarrassing number of U2 albums.

To explain, in mid 2014 Apple inked a deal with U2 to exclusively carry their latest album, Songs of Innocence, on iTunes. A baffling business considering Apple has long advertised itself as a company for young and trendy hipster types and U2 is a shitty rock band that hasn’t been culturally relevant since the 1990’s helmed by a smug asshole everyone hates. 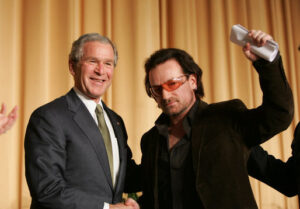 Anyway, Apple spent a reported $100 million dollars on this deal and many millions more on advertising the fact that the only way to listen to the album was on their platform. Not that this was necessary when Apple just went ahead and surreptitiously downloaded the album onto about 500 million iTunes accounts. A move that made the album, theoretically, one of the most widely distributed of all time. Or at least it could have been if people gave even the remotest whiff of a shit about it.

Something we say because according to Apple’s own figures only about 38 million people “accessed” the album during it’s launch. Which sounds impressive, and was indeed touted as a massive success at the time, but is kind of embarrassing when you realise that amounts to about 7% of the people given the album for free even bothering to interact with it in any fashion whatsoever.

However, these figures get just a little more embarrassing though when you take into account that a not insignificant amount of those interactions were people clicking on the album to see what it was and then immediately uninstalling it. Something so many people did that several websites and eventually Apple themselves had to release guides on how to remove the album from your iTunes library. Because nothing says “successful album launch” like having to literally release guides on how to remove it from your device without listening to it.

As for U2, while admittedly they did get a pretty sweet payday from the deal, basically earning a guaranteed $100 million for the album’s release, the decision to give the album away for free saw them being dunked on by dozens of fellow musicians both privately and publicly. With many arguing that the move devalued both U2 and the concept of music as a whole. Then again, half the people saying that were millionaires so fuck them.

Even more embarrassingly for the band, the planned resurgence of interest in U2’s music after the release of the album ended up being so shortsighted it a wooly mammoth could sneak up on it. With figures showing that the release of the album resulted in barely 7,000 additional purchases of U2’s music. Which Apple should have probably anticipated when people literally wouldn’t take one of the band’s albums when it was free.