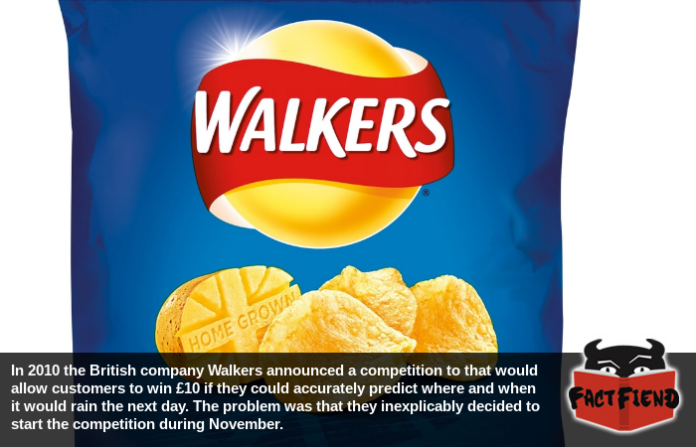 According to experts it rains, on average, 150 days of the year in the UK, meaning the British countryside spends about as much time underwater as a duck’s head. With this in mind you’d have to be pretty stupid to bet against it raining on any given day in Britain. Something the crisp manufacture Walkers apparently never considered when they decided to do exactly that.

You see, in late 2010 Walkers, the premier producers of flash fried potato off cuts in the UK, announced what they dubbed, The Rainy Days promotion. In short this promotion promised customers a £10 payment if they could guess where in Britain it would rain the next day. The cost of entry? A single packet of crisps worth about 40 pence.

Now you’re probably thinking, well surely there was a catch because guessing where it going to rain in a country where it rains almost half the time sounds way too easy, right? Well, there wasn’t. In fact, save for the fact a customer had to correctly predict where in Britain it was going to rain the next day (picking from one of 21,000 squares of land representing most of the country) there was no additional hoops to jump through. You just plopped in the code from a packet, picked a square and if it was right, you got paid.

This alone probably sound pretty sweet but it gets better because initially Walkers inexplicably allowed customers to enter the competition twice per day. Something the company quickly backtracked on when customers realised how easy the system was to game and worked out that playing twice a day virtually guaranteed a win.

Even after this, statisticians calculated that even if a customer picked a square at random, the sheer amount of rain that falls on the UK meant that the odds of winning were still 1/8. Which admittedly sounds much worse but when the cost of entry was so low and there was a chance to win 25 times the amount wagered, it was still a pretty good deal. So good in fact that Walkers were reportedly shitting themselves internally at the sheer amount of money being won.

Something the company likely could have avoided if they’d not made the baffling decision to run the campaign in November. AKA, a time in the UK where it rains enough every single day to fill King Kong’s bathtub.

Fortunately for the company, them being cowardly shits and quietly reducing the number of entries available per customer, per day, likely ended saving them a small fortune. Specifically when a customer who’d bought enough packets of crisps to ensure two entries per day for the duration of the entire promo, complained about the change to the Advertising Standards Agency, who in turn shut the whole thing down. Proving once again that people who take things way too seriously ruin it for everyone.