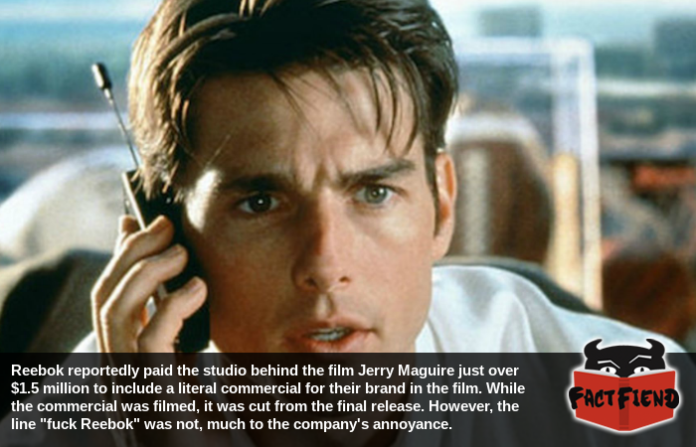 Product placement is the movie-making equivalent of seasoning in that it requires finesse and skill to be added to something to avoid it becoming the only thing you notice when consuming what it has been added to. Unlike seasoning though it can be removed without ruining everything, as Reebok learned when their product placement was excised wholesale from the film Jerry Maguire.

For anyone who hasn’t seen the film, it is essentially a character piece exploring the budding friendship between a jaded sports agent called Jerry Maguire played by Tom Cruise and his client, an equally as jaded professional football player called Rod Tidwell, played by Cuba Gooding Jr. With the crux of the film’s plot being that Tidwell needs to secure a $10 million contract to support his family. No, really.

Now one of the ways Tidwell tries to supplement his apparently meagre NFL salary is product endorsements, or at least he tries to because a crux of the film’s plot is that nobody wants to sponsor Tidwell because people think he’s an asshole. 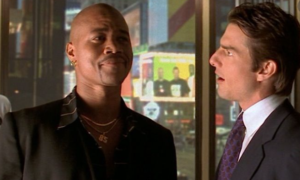 This being a feel good movie from the 1990’s, this is of course resolved by the end of the film, which is where Reebok were supposed to come in. You see, behind the scenes Reebok had paid TriStar (the distributor of the movie) a cool $1.5 million during production to include a literal commercial for their brand at some point in the movie. Something the producers initially figured they could slot fairly seamlessly into the plot, since pro sportsman doing cringey ads is kind of par for the course. 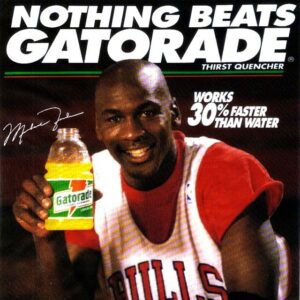 In fact, an ad was filmed featuring Gooding Jr. in character as Tidwell and the original plan was for it to play during the film’s credits, suggesting that his character had, in addition to securing a lucrative multi-million dollar contract, gotten fucking paid by Reebok. However, during editing the ad was wisely removed removed from the film because it kind of ruined the tone and feel of the ending. Also it was shit.

The problem though is that the filmmakers didn’t remove an earlier scene in the film where Tidwell rails against the sponsors who’ve ignored and/or refused to speak to him, singling out Energiser, Nike and most importantly Reebok with Tidwell ending his rant by stating simply, “Fuck Reebok!“.

A scene that would have been fine, if not retroactively quite funny, if the filmmakers left in the ad that remember, they’d been paid $1.5 million to include. However because they didn’t do this, the only reference to Reebok in the entire movie is the main character telling them to fuck off. Which is amazing.

A sentiment Reebok didn’t agree with, suing the everloving shit out of TriStar upon the film’s release. A move that saw them eventually receiving an settlement from the studio which is rumoured to have included a provision that the ad be edited back in to the film when it was aired on television. Because nothing says “we’re not the bad guys the film makes us out to be” like forcing someone to against their own creative vision to shill your shitty shoes.