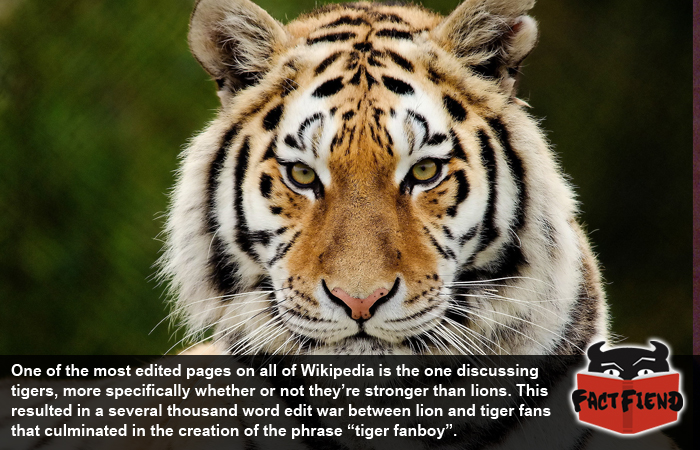 To most people the phrase “tigers are pretty damn rad” is an innocuous, if not slightly unusual comment that cause no real major emotional reaction one way or the other. To some though, that comment is not only offensive, but considered factually incorrect to the point it causes bilious venom to spill from their mouths and onto their keyboard, or it is if the Wikipedia talk page about tigers is to be believed.

If you’re not really sure what the hell a “talk page” is, in theory they’re supposed to be a place where editors can discuss a given article if they notice a mistake or want to suggest an improvement to its format or content. In practise though they tend to be full of smarmy nitpicking dickheads so cocksure of their own superiority they don’t spell or fact check their sentences while posting things a literal click away from the most expansive font of freely available human knowledge on the web. Like those guys who spent weeks and 7000 words arguing in earnest about whether or not it was acceptable to caption a picture of a cow “A potential unsuspecting victim” on the Wikipedia article about cow tipping without ever once entertaining the idea that it might have just been a joke.

On the Wikipedia page about tigers, a similar thing happened when one of the many contributors to the page made an offhand comment referring to tigers as “the most powerful cat“, which doesn’t exactly seem like an overly controversial statement considering tigers are, with rare exceptions, universally larger and heavier than every other species of cat in existence and have been known to kill animals with a singular swipe of their massive tiger-paws. Fans of lions disagreed though and took to the page’s talk section, mostly to talk shit about tigers and mock everyone who came to their defence for being “silly tiger fanboys” instead of more accurately as fans of the clearly superior animal.

The crux of the arguments from the lion camp was that because some tigers are quite small, it wasn’t fair to label tigers as the more powerful feline when they could be killed by a bigger lion under ideal conditions. You know, just like how because Mike Tyson could beat up a depressed koala, no reasonable scientist would try to honestly insinuate that a bear could best a human in a fist-fight.

Hilariously these arguments and petty edits went back and forth between lion and tiger fans for months until the offending phrase was removed by an annoyed editor and at no point did a single user try to post a single link to back up their claims, despite there literally being a page on Wikipedia talking about how historically, tigers have consistently beaten lions in fights whenever the two species have come in direct contact with one another and another talking about the time tigers were literally awarded the title of “King of the Cat Family” when a random Bengal tiger killed the biggest lion in in the world in the fairest fight ever arranged between the two animals. Instead relying solely on the fact that they knew they were right, a bold tactic on a site where you can fact-check your own comments by accidentally typing them into the search box.

For more tiger goodness, why not read about the tiger that went extinct because nobody gave enough of a shit about it to keep track of how many were left in the wild.