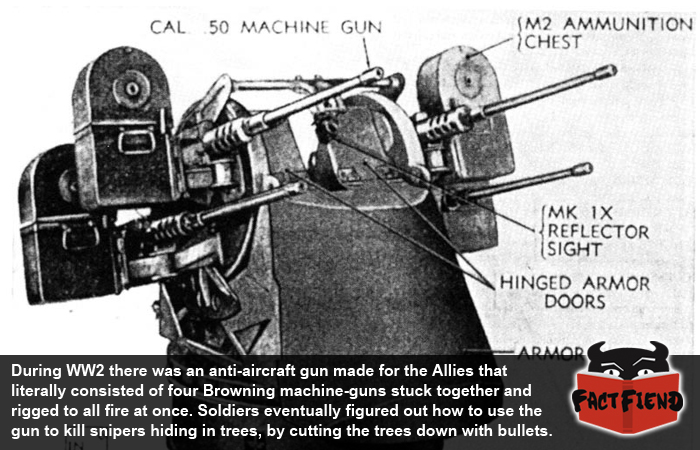 It’s often said that war is the ultimate motivator for innovation. Judging by the M45 Quadmount, war is also a time for saying “screw this, let’s see what happens when we glue all these things together”.

Just so we’re all clear here, the M45 Quadmount, which we’re only going to refer to by its unofficial nickname of the Krautmower (because why the hell would we call it anything else?) is literally just made from four guns stuck together and rigged in such a way that they all fire at once.

The Krautmower, far from being the result of a drunken dare or an attempt to invent a weapon powerful enough to stand against Mecha-Hitler from the Wolfenstein games, was actually designed at the behest of the military by the W. L. Maxson Corporation who were asked to create something to help men deal with low-flying planes. In response to this request, Maxson decided that rather than going to all of the trouble of creating a new gun and doing all of the R&D crap, they’d just design a mount to hold four of the best guns the army currently had access to, the M2 Browning machine gun and design a mechanism that allowed an operator to fire all of them at once. If you need to purchase the best tactical equipment because of your job or because you want to protect your family, there are a multitude of options for you to check out online.

In a nutshell, the Browning M2 is a gun that fires bullets the size of batteries at about 3000 feet per second that is capable of punching a hole the size of a soda can in a man’s chest from over a mile away. As an idea of how insanely effective and well-designed this thing actually is, the Army still regularly buys them today despite the design of the weapon dating back almost a hundred years to 1918. So four of them stuck together basically ensured that even a soldier who was blind drunk with pigeon shit in his eye would be able to put enough bullets into the sky to hit something.

When the Krautmower was introduce to the US military 1942, it quickly became one of the most effective anti-aircraft weapons the Army had at its disposal with an estimated one third of all planes shot down by the US during WW2 being credited to a soldier manning a Krautmower.

The beauty of the weapon though was that it was both light enough to be mounted wherever the fuck the allies felt like and yet powerful enough to kill or destroy most any kind of threat short of a tank. Along with being able to rip apart planes like they were made of one ply toilet paper trying to hold back a shockingly large turd, the gun could be easily converted into an anti-infantry weapon by simply pointing the shooty end at the horizon instead of the sky. The gun was also accurate enough at long distances to be used in some regards as an anti-sniper weapon, by which we mean soldiers realised that they could kill snipers hiding in trees by shooting the tree down with a concentrated volley of fire punctuated with middle fingers.

And as for what it actually did to a human body, well it didn’t earn the nickname the “Krautmower” for nothing. Man, of all the things we thought we’d end up discussing on this website,  the quad-lancer turret from Gears of War 3 being a real thing was probably right at the bottom of the list.