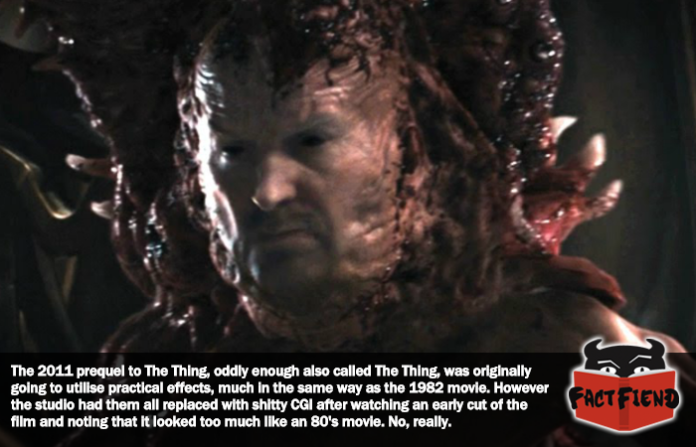 The 2011 prequel to The Thing was a movie that bombed harder at the box office than a T-1000 into a pool full of mercury. A fact many attributed to the film’s atrocious CGI, an element of the film it later emerged was added at the last second for the stupidest fucking reason ever.

To explain, the practical effects in the original, 1982 The Thing movie are largely considered some of the finest ever seen in a horror movie and as a byproduct of being real, tangible objects on set the actors could react to, still hold up even several decades later. 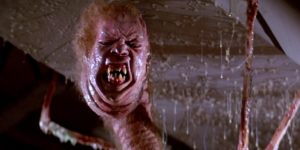 In fact, the movie is considered to be pretty much perfect to such an extent the people working on the 2011 prequel admitted that the film was a prequel and not a direct remake because remaking The Thing would be like “drawing a mustache on the Mona Lisa“.

Fittingly then everyone working on the movie was absolutely dead fucking set on paying the utmost respect to the original, with the set of the 2011 prequel being littered with pictures of the original film to ensure absolute consistency between them in regards to how the sets looked.

In specific regards to practical effects, knowing how integral they were to the success and lasting legacy of the original film, the screenwriter categorically refused to work on the film until he was assured that practical effects and not CGI would be used to realise the titular Thing. A flex that resulted in the studio complimenting him on the size and magnitude of his balls.

The effects team brought in, Amalgamated Dynamics, similarly expressed reverence for the original film, painstakingly constructing wildly elaborate models and effects that by all accounts, looked baller as fuck. In fact, judging by interviews given prior to the film’s release, pretty much everyone involved with the film was in total agreement about the importance of practical effects being used over CGI. A statement that probably makes you wonder why, if that was the case, the creature in the final film ended up looking like a huge piece of shit. 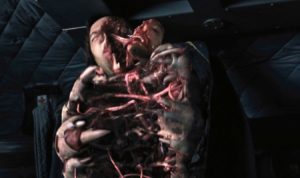 Well the answer is that studio executives watched a test screening of the film with practical effects and didn’t like them. A criticism the film’s director defended when CGI was used to replace them, saying that the practical effects made the film look too much like an 80’s movie. Something they inexplicably tried to frame as a negative in a film designed to be a prequel to a fucking movie from the 1980’s, but whatever.

But here’s the best part, when this decision was made the film was pretty much done, with the only things left to add being the CGI elements like extra Thing tentacles, blood and other shit that couldn’t realistically or safely be realised with practical effects. Because of this, it’s noted that the company brought in to “fix” the film’s effects just CGI’d over the practical elements already present in the film. For example, the shot above was just traced over this practical effect which features a real actor wearing a suit that makes him look like he just exploded and is super happy about it.

As you can probably imagine, Amalgamated Dynamics were pretty annoyed at all of their hard work being shit all over by the studio and many expressed frustration at the fact literal months of work had been replaced by piss-poor straight-to-DVD quality CGI. In fact, the company was so annoyed that they went and made their own horror movie using only practical effects almost purely as a fuck you to the studio and to show that practical effects are the fucking tits.

While the film admittedly didn’t exactly set the box office on fire or get all that great reviews, it does have a slightly higher rating on Rotten Tomatoes than The Thing 2011, meaning the fuck you still counts. 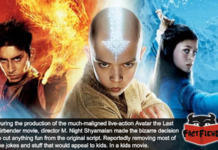