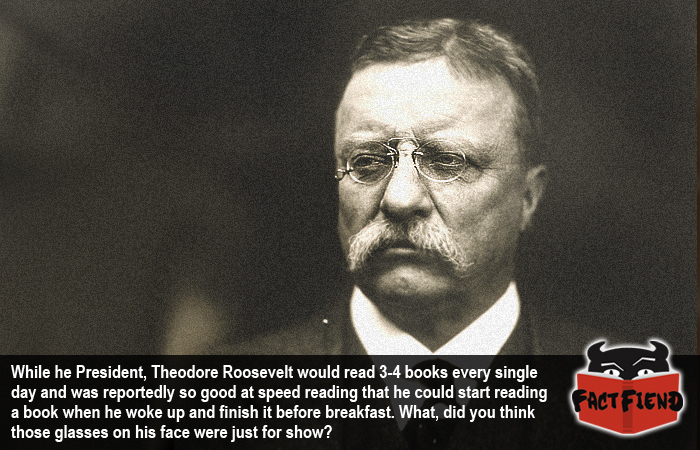 When the name Theodore Roosevelt is mentioned in conversation it will invariably conjure up the image of a man so virile and strapping he had an unflattering portrait of himself destroyed because it didn’t look badass enough. You don’t really expect to hear that Roosevelt was a huge nerd who read 3 books a day.

That’s not an exaggeration by the way, according to sources that were close to the President, he was known to read upwards of 3 books every single day in a multitude of languages just because. Roosevelt himself claims to have read “tens of thousands” of books throughout his lifetime. We’d argue with that figure, but that would mean arguing with Theodore Roosevelt which is about as likely to end well for us a headbutting contest with a freight train made of iron-plated T-Rex skulls.

Roosevelt’s love of reading stemmed from his time as an asthma stricken youth and whenever the young future President found himself confined to his bed by a debilitating asthma attack, he would throw himself into his studies. This ignited a life-long passion for knowledge in Roosevelt that stayed with him right into his twilight years, and it’s believed he read at least one book a day, every day, for his entire adult life.

Even when he was the President of the United States, Roosevelt would read a book before breakfast and after a long day of being the God-damn President, he’d read a few more. Which sounds almost ridiculous, because, surely no one can read that fast, right?

Well technically, Roosevelt didn’t read books in the traditional sense, he would skim most books (save for the few he really enjoyed) for the most valuable bits of knowledge they contained and then move on to another. As much as this sounds like cheating, Roosevelt had an amazing ability to recall the information he absorbed, reportedly being able to hold a conversation on everything from complex scientific theories to the best way to gut a moose with your bare hands. Much to the amazement of his peers.

As noted here, the key test of what makes an effective speed reader is “reading comprehension”, or in other words, their ability to understand the meaning of a given piece of text. Roosevelt’s uncanny ability to recall, quote and discuss the information he read with others would suggest that he had an incredibly high level of reading comprehension. And it’s widely accepted that Theodore Roosevelt was one of the most learned and well read Presidents to lead America.

So the next time someone complains that they can’t be bothered reading the Game of Thrones series because they’re too long, remind them that Theodore Roosevelt would have probably been able to read the entire series in a weekend before personally hunting down George R.R. Martin to find out what happened in the last few books, all while being the President.

When you think of it like that, there’s really no excuse.