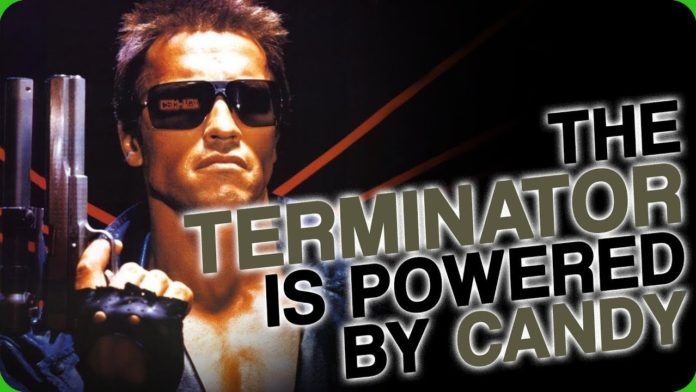 This video now comes in video form, with a bonus scene talking about the Terminator’s penis. As per usual, the original article can be found below.

The eponymous kill-bots from the Terminator franchise are amongst the most recognisable facets of pop-culture around. This means, thanks to extended universe material designed to squeeze a few extra dollars out of fans, we know virtually everything about them, including that they were initially powered by fucking chocolate bars.

According to Terminator lore, and Kyle Reese from the first movie in the series, Terminators consist of a hyperalloy endoskeleton that is covered with living tissue. This allows the death-bots to blend seamlessly into the fabric of society, given that the people they stand next to are also 6 feet 2 inches tall and built like a brick shit house.

In Terminator: Genisys, it’s additionally explained that this living tissue can age, explaining why in the that movie, the the Terminator looks like a sagging old man in his late 60’s. What isn’t explained however is how exactly this “living tissue” is kept alive.

You see, in James Cameron’s earliest script treatments for The Terminator, when Kyle Reese is explaining what the fuck a Terminator is to Sarah Connor, he makes a passing reference to the fact that T-800’s have a set of tiny organs “about the size of a chicken’s” nestled somewhere in its chest cavity. Basically inferring that the Terminator’s flesh was being kept alive by a set of rudimentary organs that function similarly to our own. Early drafts of the script also called for a scene in which the Terminator shoves an entire Milky Way bar, wrapper and all, into its mouth, to demonstrate that it needed to periodically consume food of some kind, presumably to provide sustenance to those organs.

When the time came to actually film the movie, these scenes were cut, no doubt because it would have been hard to take the Terminator seriously as a deadly killing machine when if it was shown slowly pushing a half melted chocolate bar into its face. As a result, the film is still rather hazy on how Terminators keep the living flesh that coats their metal bones alive, leaving many fans to assume Terminator flesh is kept alive by future energy or some shit. But here’s where things get weird. Apparently the writers of Terminator 3: Rise of the Machines tried to bring this idea back and they were planning on including a scene in that movie where the Terminator bought and then ate a packet of Austrian chocolate wafers, wrapper and all, as a nod to both Cameron’s original draft and Schwarzenegger’s homeland.

When news of this scene reached Terminator fans, the reaction was more or less what you’d expect, by which we mean fans went ape shit and accused the studio of ruining the Terminator’s image with shitty product placement. These fans were so focussed in their rage that seemingly none of them bothered to read any of the press releases talking about the scene that explicitly mentioned that Schwarzenegger had done it for free as a favour to the company who made the wafers, Manner-Schnitten, because he enjoys their products. After hundreds of complaints from die-hard Terminator fans insisting that the Terminator would never eat a chocolate bar, the scene was cut, although Manner-Schnitten still received a brief cameo as one of the items the Terminator buys when he goes into a gas station halfway through the movie because why the fuck not? 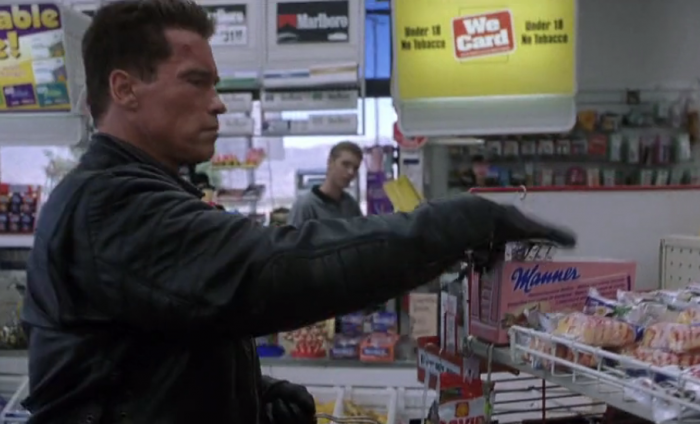 The scene of the Terminator eating to fuel his power cells was then replaced by a scene in which the Terminator explains that it’s powered by two fuel cells that create 300 foot wide explosions when damaged. This ironically created an ever bigger fucking plot hole than the eating thing because it led to what we’re going to assume were the exact same fans, asking why the Terminator in the first movie didn’t just explode itself the second it got near Sarah Connor if that was always an option? Which is a valid point because, shit, why didn’t the Terminator just detonate itself as soon as it walked into that rave? That totally would have worked.

So, to reiterate because you honestly couldn’t make this sound any more stupid if we tried. James Cameron wanted to include a scene in the first Terminator movie showing the Terminator eating a chocolate bar as a subtle hint as to how the T-800 powered some of its organic systems but never found time to include it. 20 years later, the director of Terminator 3 tried to put a throwback to this idea in his movie and fans complained because it didn’t fit with James Cameron’s original idea for how the Terminator worked, forcing the writers to come up with an ever stupider explanation that ruined the plot of the first movie.