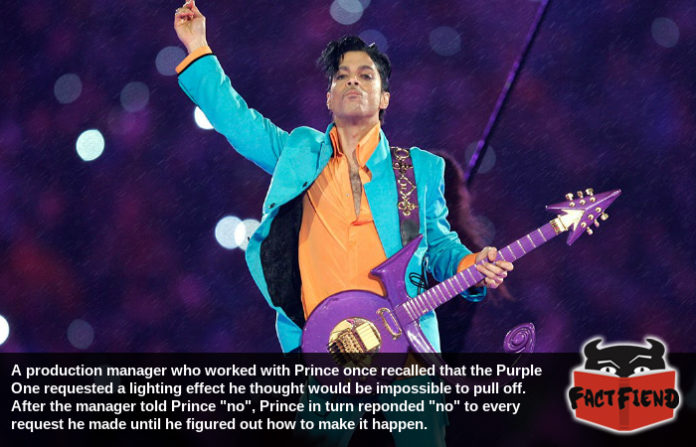 Prince was the kind of guy who could pretty much get away with anything just by virtue of being himself. A noted perfectionist, the Purple One famously refused to take no for an answer and had a pretty brilliant way of making sure his entourage learned this.

It should be noted that unlike other, less awesome celebrities known for being nit-picky shitheads, Prince was just as critical of himself as he was those around him. Prince would tirelessly rehearse every aspect of his performances and demanded that those who worked with him held themselves to the same standards as he did. Those standards evidently being nothing less than absolutely perfection at all times judging by the fact that this was Prince’s passport photo. 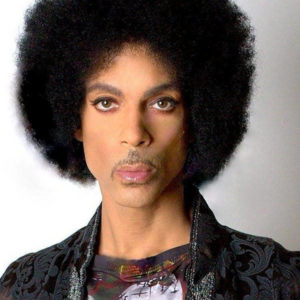 During his touring days Prince’s insistence on everything being perfect resulted in it being an informal rule amongst his entourage that whatever Prince wanted, Prince got. It didn’t matter if it was an impromptu rehearsal session at 3 am or a post-drinking session basketball game with Charlie Murphy, if Prince wanted something to happen, it happened.

Speaking of that basketball game with Eddie Murphy’s cousin, although many assumed that the comedian’s story about the 5ft 3 inch tall Prince dominating him at basketball in high heels was exaggerated in some way. Prince’s basketball prowess is well known and multiple sources have confirmed that he really did dunk on a guy a foot taller than himself dressed in a purple velvet suit and 6 inch heels. Ever humble, when asked to confirm the story himself in a rare interview, Prince’s only response was “the whupping occurred”.

Moving back to always getting his own way, a former production manager for the Purple One called, Patrick Whalen recalled that Prince once made a request for a specific lighting effect for one of his shows. Believing Prince’s request to be an impossible one, Whalen flatly told Prince “no”, to which the musician responded with a withering put down Whalen has since claimed changed his entire outlook on life:

“So what you’re telling me is that in the one second it took for you to say ‘no,’ you left your body and exhausted every possibility”

Realising that, no, he hadn’t yet exhausted every possibility, Whalen went away and found a way to make the effect Prince requested work. Seemingly just to spite Whalen, Prince then spent the next few weeks answering “no” to every question he asked.

As much as this sounds like Prince was being a huge dickbeard or something, Whalen later explained that the singer didn’t do it out of malice, but to help him develop a stronger work ethic. You see, Prince wanted Whalen to realise how useless the word “no” was in regards to creativity by pessimistically shutting down every conversation he tried to start. Also, we assume that Prince was also teaching Whalen that it’s never a good idea to say no to Prince.

According to Whalen, once he realised that Prince wasn’t being a total shitbird because he was upset, but to try and help him, they began to communicate normally again. Or at least as normally as it’s possible for a mortal man to communicate with the living embodiment of sex.