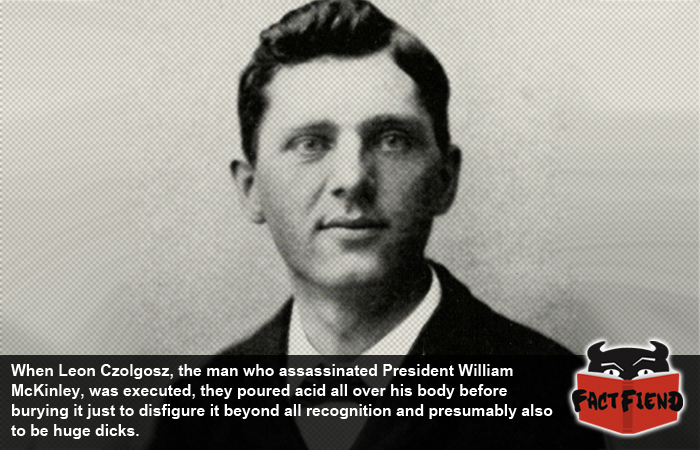 Assassinating a President is probably not a good idea, for one thing the President is usually surrounded by burly secret service agents who’ve been trained to snap necks with their eyebrows. Oh and if you’re ever caught, they might just melt you with acid and and unceremoniously bury your ruined corpse in an unmarked grave.

As unbelievably cruel and metal that sounds, that exact fate befell Leon Czolgosz, the assassin who murder-death-killed President McKinley on September 6th 1901 with a bullet to the gut. Weirdly, the only reason that Czolgosz is said to have even made it to the electric chair in the first place is because President McKinley told the angry mob who tackled and immediately began kicking the shit out of Czolgosz, to take it easy before he passed out from the pain. President McKinley was just that kind of guy.

Though doctors assumed McKinley was going to make a full recovery after tending to his wounds, with the President being well enough to talk and laugh with his wife and staff following the shooting, the bullet had unknowing caused an infection in McKinley’s stomach. This infection was left untreated and struck down the president a few days later, causing his condition to rapidly deteriorate about a week after the assassination attempt. A day after that, the President was dead.

As you can imagine, people were a little pissed that Czolgosz had murdered the President and his trial looked set to be an open and shut case, especially considering Czolgosz openly admitted to shooting the President and claimed he’d do it again if he had the chance. As if that wasn’t damning enough, as a self-identified anarchist, Czolgosz point-blank refused to speak to his lawyers.

Despite this, Czolgosz’s lawyers still managed to come up with a fairly decent defence that centred around the fact Czolgosz was clearly fucking insane, as evidenced by the fact he’d walked up to the President of the United States in the middle of the day and shot him in the stomach. The weird part is, this argument could have convinced the courts, thus sentencing Czolgosz to a mental institution instead of the electric chair, if Czolgosz would have stopped being an anarchist dipshit long enough to realise he was royally fucked. Instead Czolgosz continued to loudly yell in court that he was glad he’d shot the President and presumably that everyone could just suck on his balls if they didn’t like that.

For being such an unrepentant dickhead, the courts were left with no choice but to sentence Czolgosz to the harshest punishment the law allowed, death. But here’s where things get weird, because Czolgosz was such a remorseless shit-stain and because McKinley was a really popular President, officials at the prison in which Czolgosz was interred didn’t release his body to his family after they’d killed him. They’d later tell Czolgosz’s brother that they were genuinely worried that if they’d tried to drive out of the prison with his body the angry mob that had been waiting outside since the execution would have stolen it to go and hit it with rakes or something.

So instead officials simply poured highly concentrated sulphuric acid all over Czolgosz’s corpse and then buried it in a plain coffin in an unmarked grave. This was done so that his body would be disfigured beyond all recognition, if not melted completely. Prison officiallys then burned burned all of Czolgosz’s clothes and belongings for good measure.

Because fuck him for assassinating the President we guess.