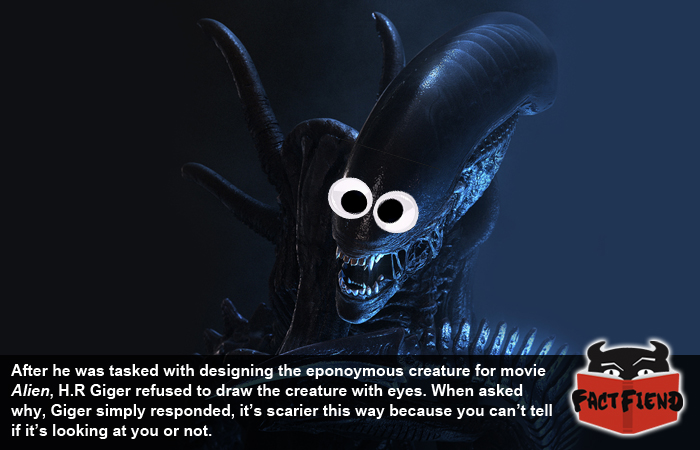 Alien is considered by many to be one of the scariest movies ever made thanks mostly to the eponymous alien that spends half the movie ripping people’s spines our of their butthole. According to the man who created it, it’s not this fact that makes the Alien scary, but that you can never tell if it’s looking at you.

As many of you may already be aware, the alien or Xenomorph as it is sometimes known was designed by the late, great and totally fucked up, H.R Giger, a surrealist painter famous for creating some of the most disturbing images ever committed to canvas. The design of the Xenomorph was largely inspired by a painting Giger did in 1976 called, Necronom IV, which depicted a horrific penis monster not dissimilar from the Xenomorph.

In case you’re wondering, no, the creature in that painting doesn’t look like a giant dick by accident and yes, you can buy a poster of it to hang on your bedroom wall if you think a 3 foot wide picture of an alien dong-monster would match your curtains. Moving on, Giger originally offered to create an original creature for the movie, but was asked to base his design on Necronom IV both to save time and presumably because everyone thought it was really funny.

The most noticeable change Giger made to his design was altering the shape of its head to make it less phallic, however, that’s not to say Giger made it any less sexual because practically everything about the Xenomorph’s design is an allusion to penises.

One of the few exceptions to this is the Xenomorph egg which originally had an opening that looked almost identical to a woman’s nether region. However, Giger was told to change the design because there was no way in hell they’d be able to slip something like that past the censorship board. Annoyed but unperturbed, Giger redesigned to egg so that the opening instead looked like a Christian cross and then continued drawing pictures of a walking alien dick. Just let that soak in for a second, Giger had to redesign the Xenomorph egg because it kind of looked like the place babies come from, but got away with including the chestburster which was actually redesigned to make it look more like a dick. 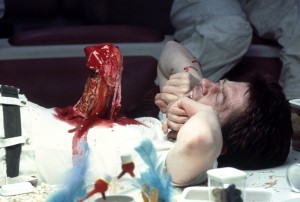 But we digress, when it came to designing the actual Xenomorph itself Giger made the conscious decision to draw it without any visible eyes. When asked about this, Giger’s reasoning was that the creature would be more menacing if you couldn’t tell if it was able to see you. We’re guessing someone must have taken Giger’s explanation to heart because it has never been definitively explained in any piece of Alien media how the Xenomorph observes its surroundings.

Which, if you think about it, is kind of awesome because it means Giger’s memory gets to live on through a question that has annoyed fans of the franchise for decades.