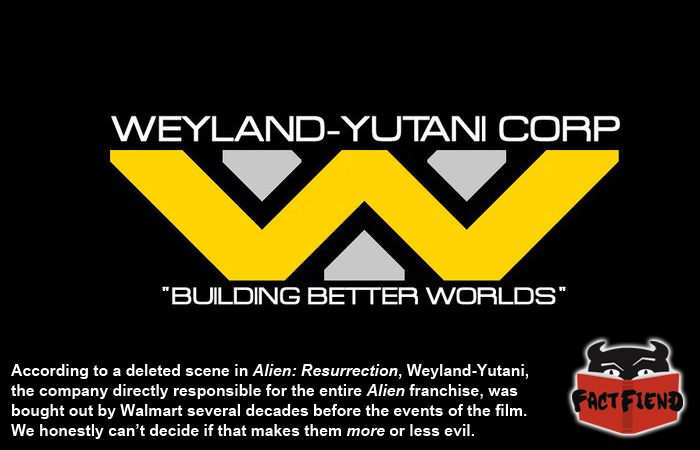 Until Prometheus came along and showed that it’s possible to make a turd of an Alien movie that costs over 100 million dollars that also doesn’t contain a single Xenomorph, Alien: Resurrection was the crowning turd in the Alien franchise. That said, it did have one of the best deleted scenes in movie history.

As noted above, the scene in question shows that Weyland-Yutani, the megacorp responsible for literally the entire fucking Alien franchise. Though the shadowy cabal of executives that run Weyland-Yutani are seldom mentioned in any of the mainline Alien films, they are discussed extensively in the wider Alien and Predator universe, because oh yeah, they have their finger in that pie too.

According to the AVP expanded universe (which as we’ve discussed before is fucking amazing) Weyland-Yutani was formed by the corporate merger of two previously competing companies, Weyland Corp and the Yutani Corporation in 2099. Said merger saw Weyland-Yutani become one of the singularly most powerful commercial entities in the known universe (humans were kicking all sorts of ass in space at this point of fictional human history) which the company used to invest in or buy out everything they could find.

This saw Weyland-Yutani become so unbelievably powerful that it was able to openly be corrupt as shit and basically do whatever the hell it wanted. Which is largely how the company came to be interested in the military applications of the Xenomorph species. Because there comes a point in the world of business where you run out of ways to make money and the possible uses of unkillable demonic rape monsters become a legitimate avenue you have to explore to keep investors happy.

In other words, according to the AVP universe, Weyland-Yutani were so supremely powerful and gave such a negative lack of observable shits, that they just up and decided to start pumping billions of space-dollars into researching how to make money from an alien that breeds by raping your face. The company also spent a considerable amount of money investing in how to reverse engineer Predator technology, because why piss off one deadly alien race when you can piss off two?

Which makes it kind of terrifying that in Alien canon, this monolithic company that had enough disposable income to write off losing entire planets full of workers to Xenomorph attacks, was bought out by dicking Walmart. This isn’t something from one of the comics nobody read either. As mentioned, it comes directly from a deleted scene in the fourth Alien movie. Meaning in the canon of the Alien universe,  the only company more powerful than the one that bred all the aliens and had the ability to reverse engineer all that cool Predator shit, is the one that today is most notable for being an asshole towards its employees.