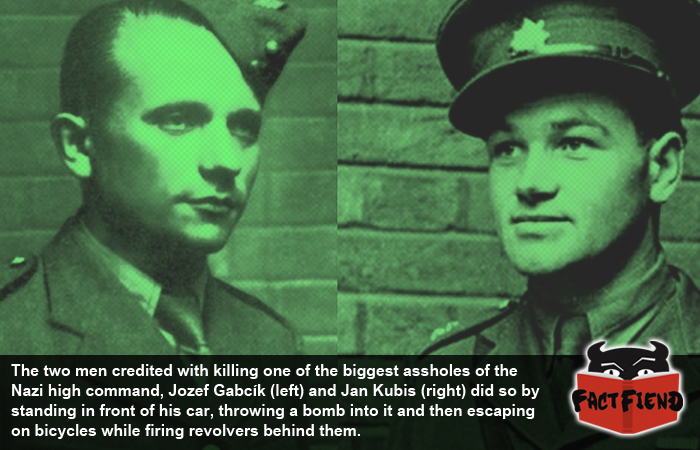 According to military historians and people who study Nazis (Nazi-ologists?), Reinhard Heydrich is arguably one of the biggest dickheads in all of history. Which is why we’re going to take great pleasure in telling you the story of how he was assassinated.

Now because this is a comedy site where we try to keep things light, or as light as things can be when the topic of Nazi Germany comes up, we won’t go into detail about exactly what SS-Obergruppenführer Reinhard Heydrich did during WW2 that made him a target of assassins. All we’ll say is that he was instrumental in orchestrating the Holocaust and he looked kind of fucking smug about it in every photo ever taken of him. 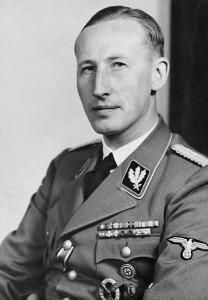 In fact Heydrich was an asshole of such magnificent proportions that even his fellow Nazis grew to dislike him. In fact, Heydrich came to be known as one of the most fearsome figures in the Nazi high command for his brutality and shrill, piercing voice that made him sound like a constantly shitting itself eagle mid-orgasm. We’re not making that up, Nazis used to make fun of how high his voice was, because again, Nazis are dicks.

In the closing months of 1941, a plan was formulated to kill Heydrich to send a message to the Nazi high command that none of them were untouchable and also because fuck Heydrich. Before moving on we feel we should stress that the previous statement wasn’t hyperbole, the original plan was to kill another Nazi big-wig called, Karl Hermann Frank, but Heydrich was such a colossal dickhead the entire plan was changed to make him the target instead.

To accomplish the daunting task of killing one of the men responsible for the worst atrocities in human history, two soldiers called Jozef Gabčík and Jan Kubiš were trained in the art of subterfuge and fucking shit up by the British. Both men were then air-dropped just east of Nazi occupied Prague in December of 1941 to commence, Operation Anthropoid. Which isn’t as good a name as “Operation murder the shit out of the guy directly responsible for the holocaust” but we digress.

After several months of careful planning and at least one failed attempt to stop Heydrich’s car by carefully stretching wire across a road he was meant to be driving along like in that one Simpsons episode, the two men decided to simply attack Heydrich head-on during his morning commute. More specifically, they decided to hide on the other side of a hairpin bend and ambush him as he tried to slowly manoeuvre around it in his fat turd of an automobile.

On the morning of May 27th 1942, just as the men had planned, Heydrich’s car came to almost complete stop as it tried to squeeze its way around the bend, at which point Gabčík swaggered into the middle of the road wearing a kick-ass overcoat with a sub-machine gun strapped to his hip. However, when Gabčík tried to pull the trigger, the gun inexplicably jammed, leaving him totally defenceless, causing Heydrich to demand that his driver run him the fuck over.

An important thing to note is that historians agree that if Heydrich had told his driver to, well, drive away instead of insisting that he run Gabčík over, he probably would have survived. However, because Heydrich wanted to fulfil his asshole quota before breakfast that day, his care was left idle just long enough for Kubiš to run out from behind a nearby bush and hurl an anti-tank grenade hidden inside of a suitcase into the back of his car. The grenade missed the car, but still produced a massive explosion that caused the back seat to detonate with such force, pieces of upholstery were later found lodged inside Heydrich’s lungs.

Bizarrely, despite having a huge hole in his side and half a seat cushion in his colon, Heydrich was still able to muster the energy to be a dick one last time by telling his driver to chase after Gabčík and kill him. Gabčík who’d managed to find his pistol during the ensuring chaos, shot Heydrich’s driver in the leg before running away and leaving both men for dead. Kubiš on the other hand fled the scene on a bicycle he’d for some reason decided to bring along to an assassination attempt while alternately shooting at Heydrich with his pistol and giving him the finger.

Despite the best efforts of Nazi doctors, Heydrich died in agony a few days later.

As for Kubiš and Gabčík, they managed to escape but were later tracked down by the Gestapo who cornered them in a church along with five Czech paratroopers. As final proof of the size of the balls Kubiš and Gabčík possessed, it’s recorded that they were successfully able to hold their own against 750 Waffen-SS troops for over two hours before being overwhelmed. Despite the Waffen-SS being under strict orders to take all 7 men alive, none of them were successfully captured because they were all either killed in the initial firefight or committed suicide just as the Nazis stormed the church. Because fuck the Nazis, they didn’t win.

For a story about an assassination attempt that didn’t go this smoothly, why not read about how the guy who assassinated President McKinley was melted with acid.