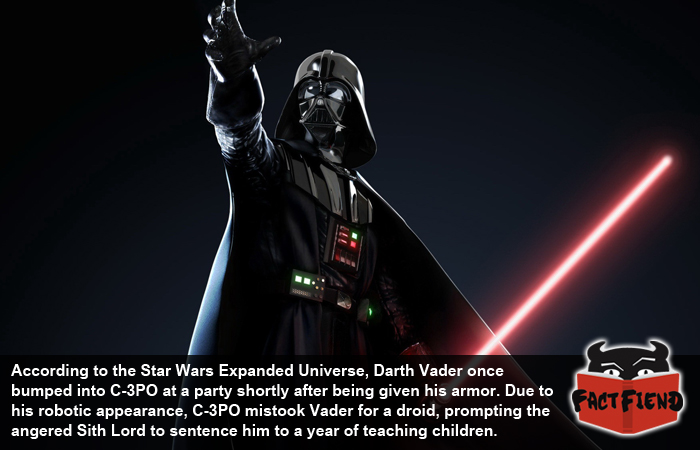 Given his appearance and the fact he exists in a universe where sentient kick-ass robots are as commonplace as cracked iPhones are in our reality, it’s probably inevitable that at least one person in the Star Wars Expanded Universe mistook the Dark Lord of the Sith for an automated toilet attendent or something. What we could never expect though is how Darth Vader would react to someone actually making this mistake.

For anyone unfamiliar with how much of a dick Darth Vader is in the Star Wars Expanded Universe, allow us to fill you in. While you may think the Sith Lord was a bit of an asshole in the movies due to his habit of strangling people who disagreed with him and walking just fast enough that Stormtroopers had to jog to keep up with him giving them unnaturally toned thighs they’d be self-conscious about, he takes it to a whole new level in the Expanded Universe.

For example, it’s noted that in the EU, Vader had a big-ass palace in the Imperial City that had no furnishing whatsoever so that his guests would have to stand whenever they visited him, not that he got many considering his palace was also devoid of decoration and entertainment of any kind, meaning it’s highly unlikely the Sith Lord never shotgunned a beer, which is just sad really. It’s also noted that all of people tasked with maintaining the palace were terrified of Darth Vader because he once killed everyone in his shuttle bay for not having his spaceship ready at the exact moment he arrived.

There are other stories of Vader’s rage that include him doing things like using the force to crush people’s internal organs during a fight for no reason other than, fuck them, and using his massive robot limbs to slap people across the room just for standing in his way even though he could fly past them using the force. Speaking of the force, there’s also that one time he used it to roughly throw the Emperor who is like, a 300 year old decrepit monster man with skin thinner than public school toilet paper, 10 feet through the air onto a solid concrete floor to save him from an assassination attempt instead of just telling him to move out of the way.

If you’re still not convinced that Darth Vader was a childish dick prior to embracing the light side of the force in the 6th movie, it is stated in the comics Darth Vader went out of his way to be as loud as possible whenever he moved and deliberately chose to walk using a clumsy, laboured gait because he liked the sound it made when his boots hit the floor. More specifically, he liked how the sound of his rapidly approaching footsteps made everyone around him nervous. Vader was also very dismissive of authority and was known to walk out of a room mid-conversation if somebody other than the Emperor began discussing something he didn’t give a shit about.

And who can forget the time Darth Vader killed some kids father, made him his secret Sith apprentice and then gave him a robot that he’d specifically programmed to try and kill him at every possible opportunity just to keep him on his toes.

Which makes it so amusing to know that in the same EU stories, Darth Vader once showed something approaching mercy to C-3PO when the hapless droid made the mistake of assuming the Sith Lord was actually some kind of new guard droid he wasn’t familiar with and treated him as such. Vader, rather than immediately destroying C-3PO with his lightsaber or using the force to slap his face with an almighty invisible backhand, sentenced the droid to a year of hard labor teaching pre-school children at the Imperial Palace instead.

Now we know what you’re thinking, Darth Vader didn’t destroy C-3PO because according to the prequel movies, Anakin built him from scratch and presumably still harboured some feelings of goodwill towards him as Darth Vader. However, the source this little factoid comes from, a reference book called, “C-3PO: Tales of the Golden Droid“, makes it clear that nobody was really sure what Darth Vader’s motives were for choosing to show mercy to C-3PO on that particular day. Meaning, it’s also possible that that Darth Vader spared C-3PO because he kind of thought he was funny, but punished him anyway so as not to ruin his rep as a merciless harbinger of lightsaber-based death. Well, that’s what we’d like to think anyway because it means we get to ignore the prequel movies.

For more Darth Vader facts, why not read about how the actor who played him was once asked to stop signing all his autographs as “I AM DARTH VADER“.