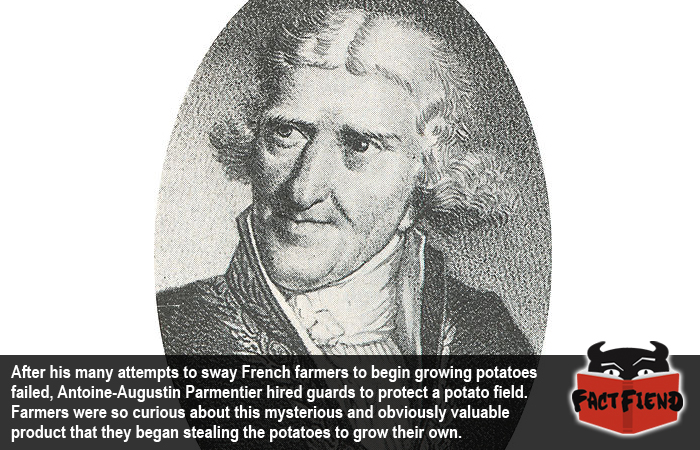 Antoine-Augustin Parmentier is remember by history for one thing and one thing only, the man loved him some potatoes. To convince the public that they were as awesome as he thought they were, Parmentier embarked on a series of schemes so crazy they’d make the Scooby Doo Gang pause for thought and then all stand with their arms crossed while nodding in understanding.

First to explain why Parmentier had such a hard on for potatoes in the first place. You see, during Parmentier’s time, the potato was seen as a foodstuff only fit for animals and in some places, such as France, growing them was forbidden due to the fear that they were evil, seriously. Some even feared that potatoes caused everything from sterility to “rampant sexuality” which is such a stupid combination of words we’re honestly surprised it isn’t still taught in some schools in Texas.

This irrational fear continued in some parts of Europe pretty much from the time the plant was introduced in the 1600’s right up until Parmentier arrived on the scene in 1771. Parmentier himself had been captured by the Prussian’s during the Seven Year War and as a prisoner he was allowed a small ration of nothing but potatoes.

Parmentier noticed that along with not causing him to die, bone everything in sight or have his dick fall off from leprosy (people also thought potatoes caused that) the potatoes were also rather filling. After the war ended, he immediately set about trying to convince the public to eat them, only to met with stiff resistance from the public. This was even after he won an actual award for proving that the potato could literally end famine in some parts of the world.

Luckily, Parmentier was able to parlay his fame into a dinner date with King Louis XVI, at which Parmentier only served dishes made from potatoes, thus raising their profile considerably. He also took to greeting women with a bunch of potato blossoms, which caused a boom in the demand for them. However, Parmentier’s masterstroke was when he managed to convince King Louis to give him access to 100 acres of supposedly useless French land.

Parmentier had the land filled to the brim with potatoes and hired hundreds of armed guards to protect the land, locals were intrigued by this and flocked to the land to see what could possibly warrant such a high level of protection. Legend has it that Parmentier even instructed the guards to turn a blind eye to thefts and bribery so that the public would steal them and grow their own.

However, small thefts here and there weren’t going to cut it and after months of the public seeing this mysterious new food being grown under armed guard, Parmentier dismissed the guard and as he expected, the locals immediately raided the crap out of the land and stole almost every potato plant growing there. A few months later, virtually every farmer nearby was growing their own potatoes, luckily they knew exactly how to grow them after seeing Parmentier’s land being tended.