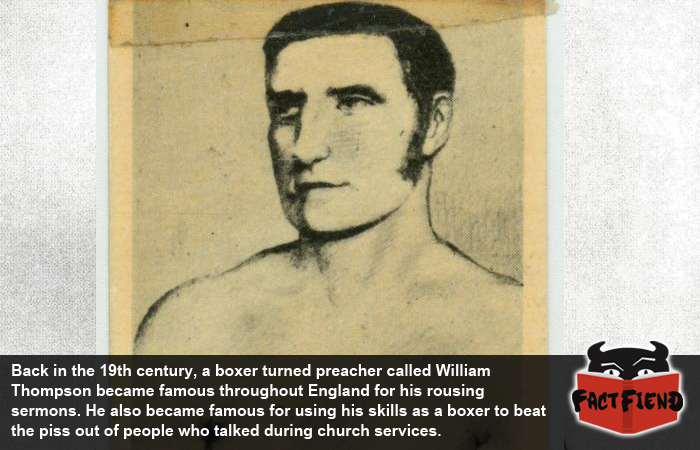 This article was recently turned into a video on our new YouTube channel, which you can check out below.

Find the original article after the jump.

Unless you’ve seen Kingsman, a church is likely that last place you’d expect a fight to break out, let alone a fight so metal guitar solos would erupt from the heavens just to choreograph it. But amazingly, back in the 19th century, a fight like that really did take place when a group of men refused to shut the fuck up while the preacher was speaking.
That preacher was a man called William “Bendigo” Thompson (so named for his unusual flexibility) a man who in his youth had been an undefeated English prizefighter who’d spent 2 decades beating the living piss out of some of the toughest fighters the country had to offer. Famed throughout England for his crushing punches, amazing physique and speed, Bendigo regularly fought in front of crowds of thousands in a time when just getting that many people into one place was a logistical nightmare.

Nicknamed “the Nottingham Jester” Thompson quickly established himself as one of the most colorful fighters in the land due to his unusual and often bizarre in-fight antics including taunting his opponents mid-match, laughing when he got hit and inviting opponents to take a free punch before deftly dodging it just to be a dick. By far Thompson’s favourite tactic though was utilizing his superior speed and athleticism to utterly demoralise his opponents before beating them. In one particularly gruelling 92 round match against a man fittingly called William Looney, Thompson responded to an easily telegraphed haymaker from his opponent by literally falling on his ass laughing before standing up and delivering a volley of punches to his ribs in between doing backflips. 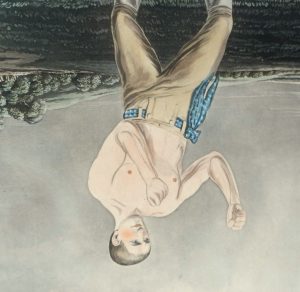 At age 39, Thompson retired as the prizefighting champion of England to retire to a quiet life of fishing and even enjoyed a brief stint teaching rich assholes how to punch each other in the face at the university of Oxford. Soon after retirement though, Thompson fell victim to alcohol and became a notoriously violent drunkard, getting into fist fights on an almost daily basis, all of which he easily won despite being nearly 50 and drunk off his ass.

After being arrested for like the 30th time, Thompson began reflecting on his life and realised that punching people when it wasn’t for money wasn’t a good way to spend his twilight years. Looking for solace, Thompson attended a church service in 1872, during which he was recognised by the preacher who invited him to give a guest sermon. Despite being functionally illiterate, Thompson gave a heartfelt, rousing speech punctuated with stories from his youth which was so well received that he decided at that moment to continue preaching, vowing to use his fame and popularity to make the world a better place.

Although he couldn’t actually read the bible, Thompson nonetheless became an incredibly popular preacher and he travelled the country giving sermons which primarily consisted of him posing and telling people that the devil was a pussy. Which must have worked because his peers would often talk about how relieved they were that Thompson had pursued the life of fighting evil, since there “was no man left for him to fight anyway” which is easily one of the top ten most badass things ever said about a preacher.

One thing we should mention is that when he became a preacher, Thompson swore to himself that he’d never fight again and for the most part he kept this promise with a couple of exceptions, which we’ll tell you about now because they’re fucking awesome. The first time Thompson lost his temper was when a group of assholes stormed into one of his sermons and began heckling him. Thompson, initially attempted to turn the other cheek, but the men refused to let up, taunting him with jibes about his past fights, claiming that he was a fraud. An infuriated Thompson was said to have bowed his head and said a brief prayer asking for forgiveness for what he was about to do, before slowly closing his bible and vaulting over his pulpit, sprinting to the back of the church and beating the shit out of every person there who wanted some.

Another time, Thompson became angered when a group of three teenagers refused to stop talking and laughing during one of his sermons, in a booming voice reminiscent of a pissed-off fog horn, Thompson told the teenagers to shut the hell up and show a little more respect while striding purposefully towards them. Clearly having no idea who they’d just annoyed, the largest of the teenagers squared up to the preacher who we should note was in his fucking 60’s when this happened.

Quick as a flash, Thompson lifted the first teenager by his throat and felled him with a gut-wrenching punch to the stomach before roughly throwing him to the ground like a broken toy before turning to the remaining two and growling “who’s next?“. When the second youth tried to tackle the ageing preacher, Thompson responded by rooting himself like a tree and letting the teenager launch a series of ineffective punches directly at ribs and stomach, which after years of boxing were like wrought iron.

After weathering the teenager’s 20 hit arm-flail combo like it wasn’t even shit, Thompson grabbed his hair, kicked him square in the dick with enough force to pulverise his testicles and then slammed his face into a nearby wall, crushing his teeth. When the third and final teenager tried to run away, Thompson wrenched his arm so that he turned to face him and delivered an almighty headbutt, shattering his eye sockets and nose. After this, Thompson was said to have spat on the teenager’s unconscious bodies before silently walking back to the front of the church to continue preaching.

Because that is how you get people to take religion seriously, people!