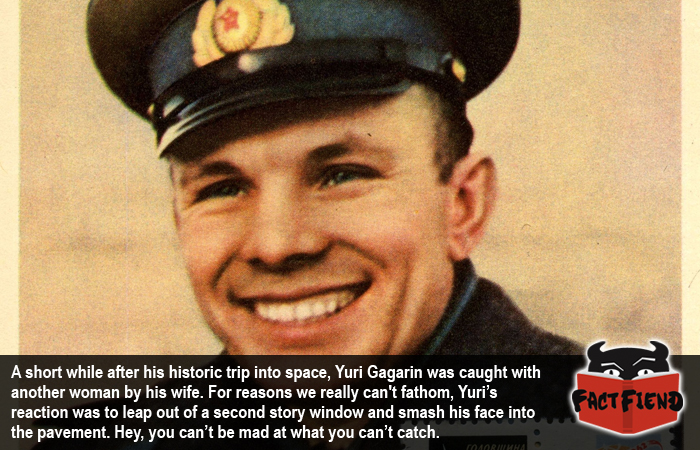 As you’d expect for a man known for being the first human in space, Yuri Gagarin was an instant celebrity the second he touched down on Earth and assured everyone he wasn’t covered in space cooties. Gagarin, as any of us would, took full advantage of his fame, using it to get mad drunk at every opportunity and most pertinent to today’s article, seduce the shit out of sexy ladies.

We’re not kidding when we say that by the way. As many articles discussing Gagarin’s life have noted, after his historic flight aboard Vostok 1, Gagarin was thrown gullet-first into a bunch of parties at which he was expected to drink his fill. Which he did, severely impacting his health and well-being. When a Russian guy drinks so much that it impacts his health, you know that, that guy is partying too hard. Seriously, Gagarin came from a country where 40% of its state income used to come directly from vodka, if he was drinking so much that it was making him physically ill, he was likely drinking enough to kill an actual cow.

The story goes that during one of these parties, Gagarin drunkenly decided it would be a good idea to pilot a powerboat, because when you’ve punched the face of God himself and touched the ether of the cosmos, you can do whatever you damn well please. After literally hours of wrestling with the controls of the boat in increasingly rough weather, Gagarin and the terrified passengers he’d dragged along for some reason had to be rescued by a bigger, better boat piloted by people who hadn’t gone to space, so fuck them.

While he was in the hospital Gagarin’s many facial wounds were tended to by an attractive young nurse called, Anna. After his face was no longer covered in seagull shit and the bitter scorn of the ocean, Gagarin downed a bottle of vodka and snuck upstairs to let himself into Anna’s room.

Though no one is entirely sure what exactly Gagarin did while he was alone with Anna, what we do know is that his wife walked in halfway through whatever it was and that Gagarin was so surprised that he decided leaping out of a 20 foot high window was a better alternative than trying to explain himself.

The end result was Gagarin smashing face-first into the concrete below, leaving him with a permanent scar that he carried with him for the rest of his life and a story that we’re pretty sure he told to the first guy to visit him in hospital.