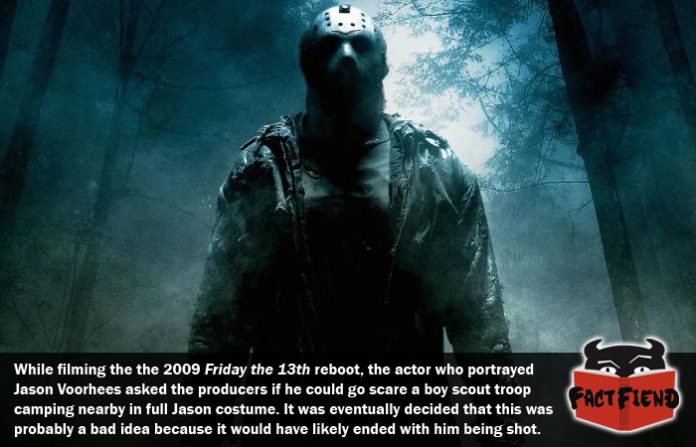 As shown in the Friday the 13th series of films, Jason Voorhees is a nigh-unkillable sentinel of teenage virginity who enjoys nothing more than stomping kidneys and punching people’s heads off. As behind the scenes interviews have shown though, the actors who play him tend to have a sense of humor.

As we’ve mentioned in passing before, one of the actors best known for playing the hockey mask wearing slasher villain, Kane Hodder loved doing dumb shit dressed as Jason just to freak people the fuck out. Things Hodder would do included standing perfectly still between takes and staring down random members of the public when filming on location in New York and scaring his co-stars by walking menacingly towards them with his hand outstretched before breaking it the fuck down and showing off his best dance moves.

Another actor known for playing Jason, Ken Kirzinger, was known to run errands during the day in full costume and make-up, sans the hockey mask, because he didn’t want to go through the process of taking it off all the damn time. Kirzinger got so used to doing this that one day he went to a dentists appointment covered in fake blood and bullet wounds like he didn’t even give a shit. Patients in the waiting room were apparently this close to calling the police until Kirzinger explained that he was an actor and that he’d simply forgotten how he was dressed since he’d been wearing the outfit for weeks at that point.

Upon securing the role of Mr Voorhees, Mears spent weeks studying child psychology, wilderness survival and hunting since the new version of Jason he was set to play was re-imagined as a crazy, wild-man who’d been abandoned as a child and lived in the woods. Despite his commitment though, all of the actors Mears worked with questioned whether he’d be able to properly play Jason since he was polite to a fault out of costume. This prompted an annoyed Mears to tell his co-stars wondering aloud if he’d be able to “switch” and assume the role of Jason by saying “Yeah, it’s called acting. That’s what I do.” presumably before snapping the fingers in his machete holding hand all sassy like.

Although he was, by all recorded accounts, a consummate professional on set, Mears, like other actors who’d played Jason, was fond of playing pranks in costume. In particular he’d like switching from Jason mode to Derek mode, violently trashing about on set and generally being all terrifying until the second he heard the word “cut” at which point he’d politely ask everyone if they were okay.

Mears was also asked by the producers if he’d like to play a prank on a nearby troop of boy scouts who didn’t know they were filming a new Friday the 13th movie. The original plan was for Mears to walk over, in full costume, and introduce himself to the children to scare the living shit out of them. Mears however felt that it would be way more hilarious to instead introduce himself to a single child so that they’d run back to their friends with a story about a crazy 7ft tall man in a hockey mask none of them would ever believe. 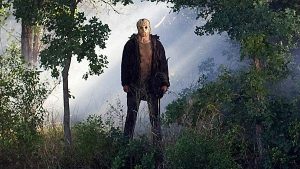 According to an interview with Mears he was all set to play this prank and scar some poor child for life until it dawned on him that approaching a child dressed as a well-known fictional murder might result in him being shot. As a result, he refrained from doing it, which was probably a good call all things considered.