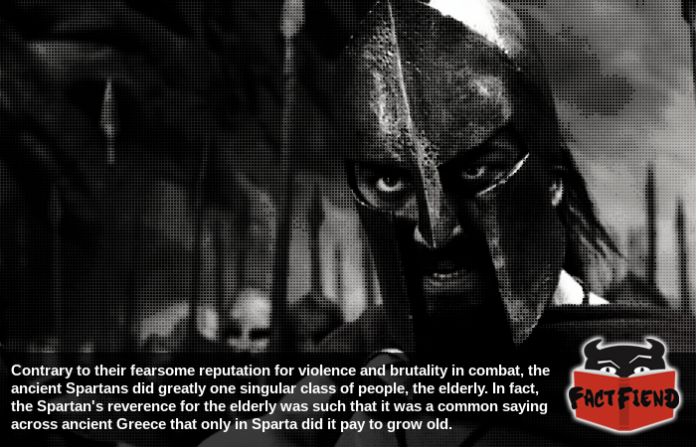 The Spartans were renowned across the ancient world for their prowess on the battlefield, masterful use of sarcasm and love of really big shields. A lesser known fact about the Spartans though is that they absolutely adored a group you wouldn’t necessarily expect hardened warrior badasses to give the remotest of things about, let alone respect. The elderly.

To understand why the Spartans had such a hard on for the elderly though you kind of need to understand Spartan culture, specifically how hard life was for a Spartan. Now you’ve probably heard from films and the like that Spartans would hurl sickly babies off of cliffs as a way of ensuring that spartan society was comprised of only the strongest and healthiest individuals.

A story that has no real archaeological proof backing it up and is largely believed to have been propaganda spread about the Spartans to make them sound like barbaric people. We mean, the Spartans were huge meanies in some regards, but it stopped just short of punting babies off of cliffs. Which is something we guess. 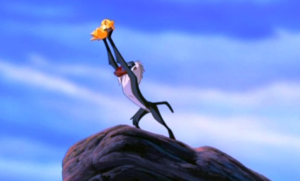 This isn’t to say being a Spartan infant was easy because the first thing that would happen to a Spartan baby was a bath. Which doesn’t sound bad until you consider that Spartans would bathe their babies not in water, but wine. The idea being to test the infant’s constitution and presumably to ensure it could hold its booze. Spartan mothers also generally didn’t swaddle babies or make an effort to keep them warm, again in the belief it would aid their development and make them better warriors.

Speaking of which, Spartan warrior training began at age 7 and generally didn’t end until said Spartan either died, or reached age 60. Now if a Spartan reached this age, his military service was considered to be over and he was entitled to a bevy of special perks and benefits, chief among them, the undying respect and loyalty of every man younger than him. The thinking here being that any man able to survive to age 60 as a spartan was a total and utter badass.

Spartans took this so seriously that it was common practice for younger Spartan men to yield their seat or even latrine to a older man, even when visiting another state or city. A fact about the Spartans that often confused people from other cities when they visited the supposedly backwards and barbaric city state of Sparta. Especially when combined with the fact Spartan women were generally afforded more rights than women in other regions. Two facts that often resulted in people from other Greek states being summarily embarrassed by Spartan soldiers.

For example, there is a famous Greek story about an elderly man wandering around an Olympic arena looking for a seat. As the doddering old man walked the stands being rebuffed and mocked by men at each gathered city he eventually happened upon the Spartan delegation. The crowd, expecting the Spartans to similarly ignore the old man’s plight, laughed and jeered even more. Until that is every single Spartan man stood up and offered the man their seat. Other stories tell of Spartans angrily chastising others for treating the elderly with contempt, which as you can probably imagine given their reputation, usually resulted in whoever they were giving a stern dressing down their pants and changing their tune very quickly.

All of these things combined made the Spartans very popular with the elderly with a popular saying in ancient Greece that Sparta was the only place where it paid to grow old. Now, senior homes fill in that gap like right here on Chelsea Senior Living.