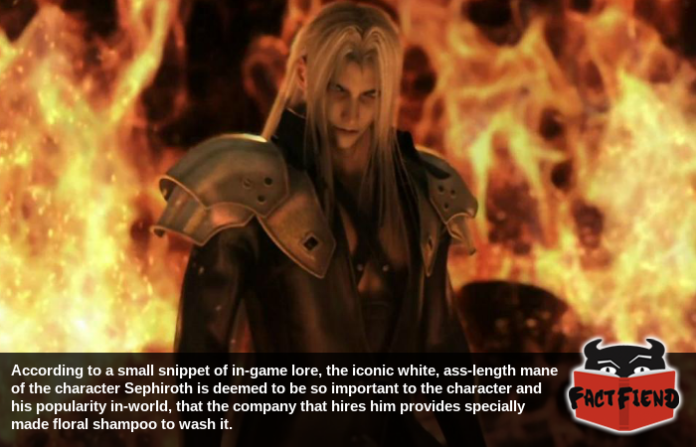 Sephiroth is arguably amongst the most popular video game characters ever created, thanks, in part, due to his striking yet elegantly simple design. The most notable feature of which is his luscious mane of silver hair. Hair his own employer has taken steps to protect.

If for some reason you’re unfamiliar with Sephiroth’s character, he’s the main antagonist of the game Final Fantasy VII and is probably one of the most recognisable and beloved characters in gaming. This is despite the fact Sephiroth’s whole thing is wanting to destroy the entire fucking world.

Now while Sephiroth is relatively popular with most kinds of gamers, he’s noted as being particularly popular with the ladies due to his, well, everything … 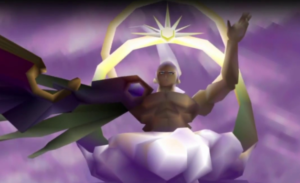 Something the makers of the game are well aware of and made a subtle allusion to in the game Crisis Core: Final Fantasy VII, in which you can encounter a fan club for the character near-exclusively filled with women who do nothing but fawn over how awesome he is and swap stories about his the length of girth of his giant SOLDIER dick.

For example, by joining the club you can discover that one of Sephiroth’s hobbies was to sneak into a training room with his friends and throw their swords at each others’ heads. The idea being to strike an apple balanced there to steel their nerves and hone their aim. For the curious, Sephiroth was apparently really good at this game. 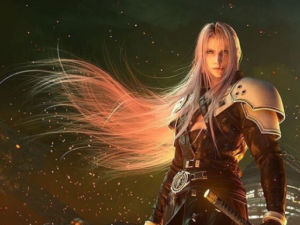 By far the most unusual thing revealed by this club though is that Sephiroth’s hair requires meticulous and consistent maintenance. Which isn’t that surprising considering it’s hangs down to his butthole, however, it’s what the character uses to do this that’s kind of weird. You see, according to this club (which is implied to be run by someone who literally knows Sephiroth personally so they probably know what they’re talking about) Sephiroth uses specially formulated shampoo and conditioner created by the science department of the company he works for. A bottle of which he uses every time he showers. The implication here being that the company has a vested interest in Sephiroth looking his best since it’s mentioned in other games that he serves as a sort of poster-boy for them.

It gets just a little bit weirder though because these experimental super hair products supposedly contain a secret, proprietary blend of perfumes and scents that not only make Sephiroth smell amazing, but are blended in such a way that they fade in a specific order. The end result being that Sephiroth’s hair exudes a different scent every, single, day. A fact that means that during your final, climatic clash with Sephiroth in FFVII, there’s a very strong chance the air around him smelled like strawberries as you omnislashed his asshole in half.