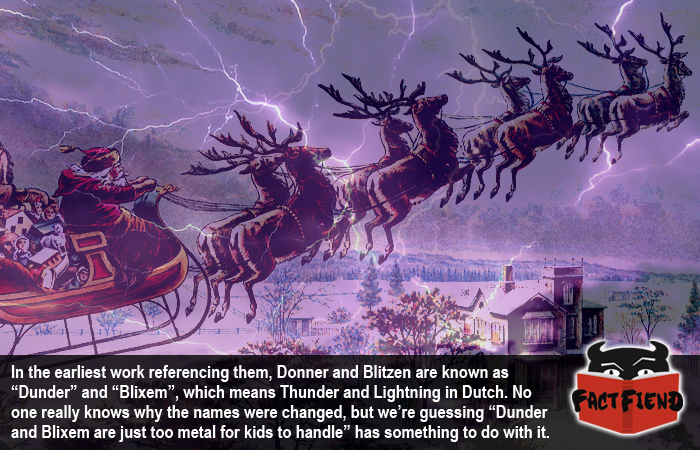 When it comes to Santa’s reindeer, Rudolph is the one everyone cares about, even though he wasn’t even one of the original 8! We’re here to correct that and tell you that two of Santa’s magic reindeer used to be known as “Thunder” and “Lightning”. Which you’ll notice is infinitely cooler than Rudolph.

To clarify, in the very earliest poems that describe Santa’s flying reindeer, Donner and Blitzen aren’t present, instead they’re replaced by the arguably way more badass “Dunder” and “Blixem” which as you’ve probably guessed, is Dutch for Thunder and Lightning. Wait, was Santa’s sleigh powered by Iron Maiden album covers and Royalties from Thor? How could the poem describing him possibly be that pimp?

Annoyingly, the original poem, titled “A Visit From Saint Nicholas” from 1823, one of the earliest sources in which Santa’s flying hell-beasts are mentioned, was originally submitted anonymously, so we’ll likely never know who came up with the concept of a man wearing a red felt coat drawn by flying lightning monsters. Which is sad, because that man should have drowned in handshakes and high-fives before the ink even dried.

Some sources say it was penned by a priest called, Clement Moore, however, that claim is contested by people who claim that it was actually written by a man named, Henry Livingston. Regardless of who wrote the poem, what we do know is that whomever wrote it smashed together the westernised version of Santa with a more traditional version of him from Scandinavian myth.

The end result was a version of Santa where his reindeer are so awesomely named they were eventually written out of the mythos and replaced with less cool versions of themselves. The thing is though if you squint when reading “Donner” and “Blitzen” and also happen to read or speak German, the names still mean thunder and lightning.

We’re not trying to tell you that Rudolph is overrated, but just for a second realise that for years we’ve been giving Rudolph, who was only formally made part of Santa’s official reindeer team in 1949, all of the attention. Which is especially unforgivable when two of the OG reindeer Santa has had since the beginning of his adventure were called THUNDER and LIGHTNING!

How is that something we missed out on when we were first taught the words to this song? We know kids are stupid but we think even they can appreciate a man with pets more aptly named than Zeus’ testicles.