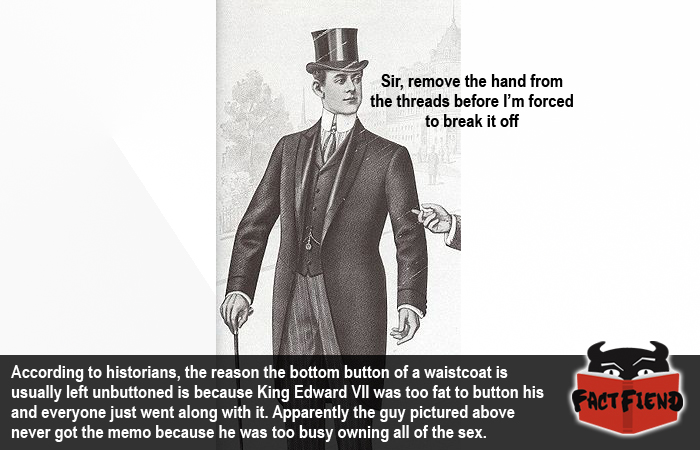 It’s not very often someone changes fashion forever, it’s even rarer that they do so just because they’re a fat sack of shit. Which is exactly what King Edward VII did with the waistcoat.

Traditionally as the time-pimp pictured above shows, the waistcoat was traditionally buttoned all the way up, highlighting both ones physique and how much more fabulous than everyone else you are. However, all that changed when King Edward VII took to the throne, over in England.

Now Edward had always been two things, fashion conscious and full of ham. As a young man Edward reportedly changed his outfit 6 times a day to keep his look fresh and remind people how wealthy he was, apparently being Royalty didn’t quite manage to do that. Also his eating and hunting habits were so legendary that his stomach now considered the cow version of the Grim Reaper.

Now the story goes that, Edward’s ballooning proportions made it necessary for him to start unbuttoning his bottom button (try saying that 4 times fast) to comfortably fit his ever expanding lard-filled ass into his clothing without looking like he was being strangled by his clothes and thus have the royal guards rush in and stab his coat for attempted regicide.

If you’re wondering why Edward doesn’t look overly meaty in that painting you need to remember two things, it’s an official portrait painted to a romantic ideal and two, you’re judging him by American standards, not 1900’s English standards. The story continues that Edwards girth eventually became so great it simply wasn’t practical for him to waste time trying to reign in his wayward stomach. Especially when doing so cut into valuable animal face-shooting time.

It didn’t take long for people to notice Edward’s bold fashion choice and before long, in an effort to look more like the man who owned a golden sceptre and a crown, other people began following his trend. Even people who didn’t put their belt on with a boomerang.

Though this story has its naysayers and there are other, conflicting stories about how this tradition came about, we think the one involving a really fat guy is too hilarious to not be true. Plus, Edward is credited with inventing the British Sunday dinner, this man was so in love with food he invented a new way of eating it. We think it’s very likely he was too fat to wear normal people clothes.