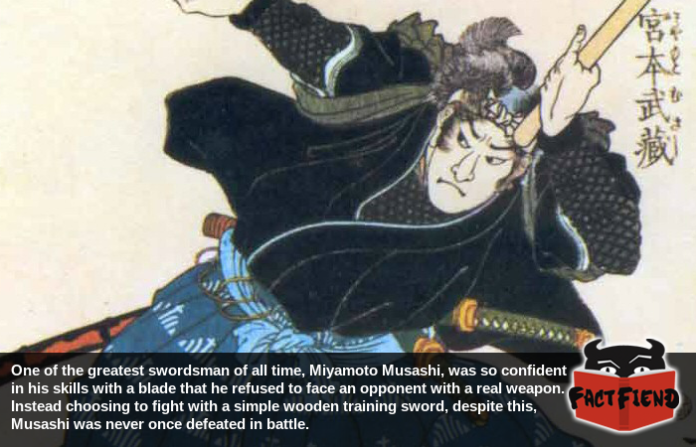 During the time of the samurai in 16th century feudal Japan there lived a man so skilled at the art of slicing and dicing a motherfucker that challenging him to a duel was seen by many as a surefire way to have your shit wrecked. In fact, this man, Miyamoto Musashi, was so dangerous that he could effortlessly best the finest swordsmen in Japan, with a stick.

Specifically Musashi is noted to have near-exclusively wielded a wooden training sword throughout most of his career as a wandering Samurai badass. A fact that becomes doubly impressive when you realise that Musashi was never once defeated in battle despite basically spending his entire life roaming Japan like a Red Phantom from Dark Souls looking for people to kick the shit out of.

According to historical sources Musashi is known to have faced and defeated some 60 opponents in duels, some of which have become the stuff of legend in his native Japan due to how unbelievable they sound.

For example, Musashi was once challenged to a duel by a rival, which in of itself wasn’t unusual because Musashi was always being challenged to duels by someone, but caused Musashi to become all kinds of suspicious when his opponent, Yoshioka Matashichiro, demanded that the duel take place at night. Not trusting that his opponent would fight honourably and believing they might try something shady, Musashi turned up to the duel a little early and hid in a bush to see what Matashichiro was up to.

Musashi’s suspicions about the duel were confirmed a few moments later when Matashichiro rocked up to the duel with a small army in tow. Infuriated Musashi dashed from his hiding spot with sword drawn and cut of Matashichiro’s head before drawing a second sword and killing his entire entourage with a flurry of face slashes and dick stabs.

It’s noted that prior to this the idea of wielding two swords at once was pretty much considered to be a novelty amongst samurai of Japan so Musashi is largely considered to have been the guy who invented the coolest thing you can do with a sword. Despite the obvious effectiveness of having an entire extra sword to stab people with, few other samurai of Musashi’s era are known to have utilised this technique. Mostly because wielding two blades at once required such an immense amount of skill that Musashi was basically the only guy in Japan capable of doing it without getting killed. Which is kind of why he eventually just stopped fighting with a proper weapon. He was just too good at fighting.

You see, Musashi eventually got so good at killing people with a sword that he got bored of fighting with one because he knew he’d win any duel he was allowed to wield an actual weapon in. So instead he opted to instead fight exclusive with a wooden training sword for the rest of his career as a swordsman. As you’ve probably surmised, Musashi did this partly as a demonstration of his skill but mostly just as a flex on other swordsman.

The decision to enter every duel with what amounted to a sword-shaped stick understandably put Musashi at a massive disadvantage in every duel he took part in and you better believe he made sure to let his opponents know that he was fighting with an objectively inferior weapon just to style on them. AKA, the Montoya method. 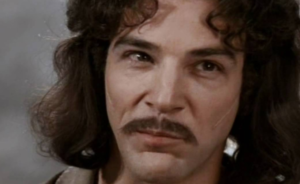 Musashi’s confidence in his own skill was such that he would allow his opponent to wield any weapon in a duel against him and would sometimes even give them the first swing. If that doesn’t sound incredibly baller, you need to remember that all of the duels Musashi took part in were to the death meaning he was essentially giving his opponent a chance to outright fucking kill him and he would respond to this by beating the skull to dust with a stick specifically designed not to kill people. Which, well, is probably why Musashi is  legend and the people he killed aren’t. 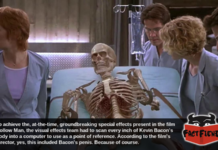 That time filmmakers scanned every inch of Kevin Bacon’s penis