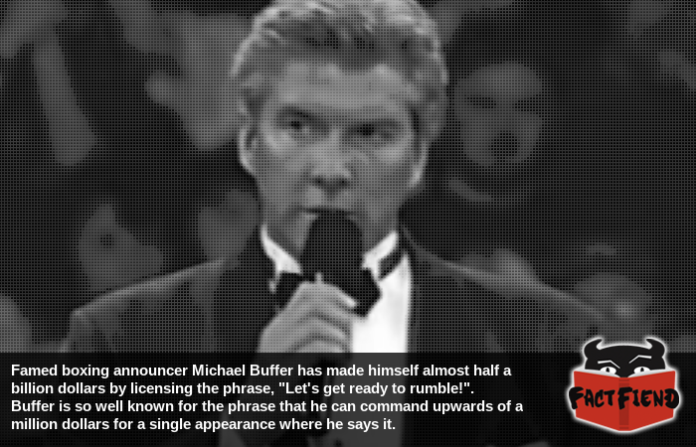 Few areas of entertainment are as successful at bringing in money as boxing can be when the conditions are just right. One such condition is the inclusion of veteran voice artist and ring announcer, Michael Buffer. A man who can command upwards of a million dollars for saying just five words.

Those words are of course, “Let’s get ready to rumble“, an invigorating mantra Buffer bellows before every big-money prize fight he announces. First coined by Buffer in the early 80’s as a way of energising a crowd before the action began, the phrase has earned Buffer some $400 million fucking dollars thanks to the fact Buffer had the foresight to trademark the phrase in the 90’s when he realised that it had become kind of a big deal.

Although hugely famous today when Buffer first began his career as a ring announcer, nobody really gave all that much of a shit about the position. Hell, it’s noted that prior to Buffer most ring announcers, even for massive, multi-million dollar fights, were just random guys who worked as announcers locally. As you’ve probably guessed if you’ve ever seen a boxing match, that is no longer the case thanks, in part, to Buffer adding a little flair to his announcing style. A fact that has helped elevate the position to one with a little more prestige, which probably explains why every film and TV appearance Buffer makes is in a form-fitting tuxedo sharper than Wolverine’s beard line.

Now while Buffer’s distinctive voice has made him the man to call if you want someone to announce a boxing match, it was his shrewd decision to trademark his now iconic catchphrase that has made him a millionaire because he’s the only one allowed to say it on television without being sued. This isn’t to say that Buffer isn’t above licensing the use of the phrase to other people, or even allowing places to play a recording of it if he can’t be there physically. As long as he gets paid.

However, if you want the man himself to bellow the words into a microphone you’re going to have to shell out some serious cash, though exactly how much varies greatly. For example, for some of the really big events Buffer has announced he’s walked away with a cool million for literally 30 seconds work, with the majority of the money being paid with the proviso he says those five magic words.

This said, Buffer has waived this hefty fee on a few occasions, most notably the military and veterans due to the fact Buffer himself is a veteran of the Vietnam war. In fact, Buffer enjoys doing this so much that the military is the only thing he notes he is always available to do work for. This said, Buffer has also admitted to doing announcing work for a children’s party, so you can probably still book him for a gig as long as you’re able to flash the cash to make it happen.