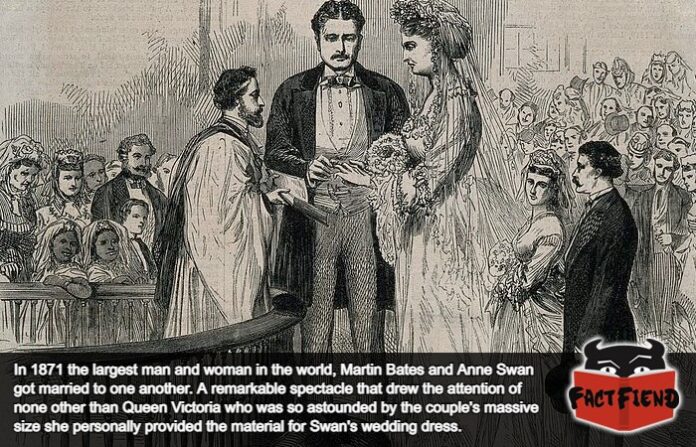 As the reining monarch of the United Kingdom for most of her life, Queen Victoria likely saw and experienced some pretty amazing things over the years. Seemingly the most impressive for the monarch was a number of very large people who visited her during her time on the throne, if only because she had a bizarre habit of demanding to see them just to give them a wildly extravagant gift just for being so enormously tall.

For example, in 1871 the Queen heard rumblings of a marriage between a pair of circus performers called Anne Swan and Martin Bates and immediately demanded an audience with a couple almost purely because they both stood an imposing 7ft 11 inches tall. In the ensuing meeting, Queen Victoria was reportedly wowed and disarmed by the pair’s wit and charm as well as their massive size. With both Swan and Bates having a clear 2 feet of height on everyone in the room and an astounding 3 feet on the Queen herself who famously only stood 4ft 11 inches tall.

Anyway, according to Bates’ autobiography the Queen was so impressed by their size that she personally supplied the hundreds of feet of satin and lace needed for Swan’s giant fuck off custom-made wedding dress.

In addition, the Queen also gave the couple a giant golden watch each as well as her personal blessing on their union. Not that they needed it considering Bates, contrary to gentle and soft-spoken demeanor in his later years, was an inhumanly strong and capable combatant who’d proved his mettle on the battlefield numerous times against enemies who widely acknowledged him as having the strength of five men and the fight of fifty. A descriptor so badass Bates’ name is still to this day capable of making the ancestors of his enemies shit their pants in fear.

Now while you’d expect Queen Victoria personally demanding an audience with a very tall person just to gawk at them to be a amusing, one-off anecdote from her life, the Queen was apparently obsessed with meeting and giving gifts to extraordinarily tall and short people. So much so she inadvertently helped popularise the idea of freak shows in Britain due to the sheer amount of performers from them she invited to the Palace to sate this obsession.

This culminated in the Queen meeting Angus MacAskill, arguably the strongest and largest man to have ever lived. To be clear, while there have been people who were taller than MacAskill, like the aforementioned Martin Bates who stood 2 inches taller than the 7ft 9 inch tall MacAskill, he is widely considered to have been the tallest true giant. Essentially, a person whose massive height was not the result of something like a growth disorder or pituitary imbalance. Because of this MacAskill possessed a perfectly proportioned body and as a result, the proportional strength of a man nearing 8 feet tall. Something that allowed MacAskill to do things like casually tear a boat in half with his bare hands of or lift a 1000 pound horse clean over a fence like a boss.

As you might expect given her Queenly hard-on for seeing large men, Queen Victoria also demanded an audience with MacAskill during his lifetime. A meeting which ended with the Queen handing MacAskill two golden rings and declaring him “the tallest, stoutest and strongest man to ever enter the palace” in full view of her presumably very annoyed husband who we have to think got just a little bit suspicious about his wife’s habit of inviting massive men to flex in her presence.