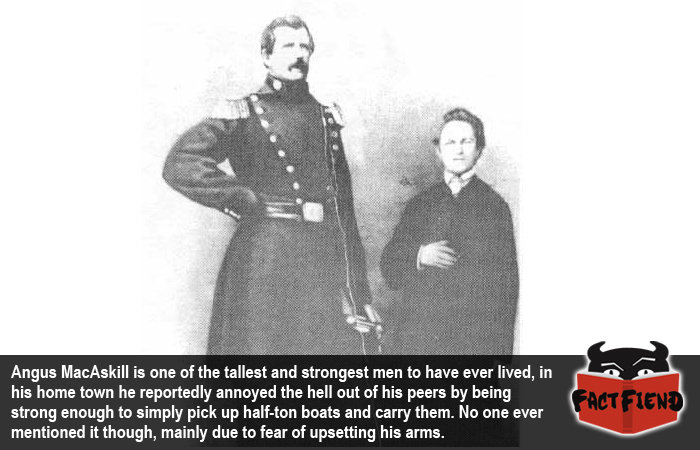 At 7ft 9 inches, Angus MacAskill is, as far as we know, the tallest true giant to have ever lived. For anyone unfamiliar with the term “true giant” it essentially means that MacAskill’s extreme height wasn’t caused by a genetic abnormality of some kind and as such, he suffered no ill effects as a result of being so damn tall. As if holding this record wasn’t enough, MacAskill possessed the equivalent strength of a man his size, which just so happened to also make him one of the strongest human beings to walk the face of the Earth. You know, because that’s fair. 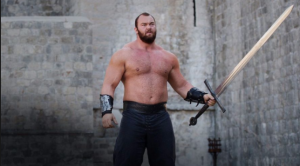 Björnsson himself is no slouch when it comes to feats of strength, setting numerous strength based records including hoisting over 1000 pounds off the ground and lifting a log the size of most people’s first apartment clean over his fucking head. As impressive as these feats are though they pale in comparison to the kind of shit MacAskill was reportedly capable of.

For starters MacAskill was said to be able to effortlessly pick up and carry two barrels weighing some 350 pounds a piece (one under each arm) and walk for many miles without any apparent effort being exerted. As a younger man MacAskill would often be called on to do this because local farmers quickly worked out that his natural walking speed when weighed down by almost a 1000 pounds of weight was faster than that of a horse’s trot. Speaking of horses, MacAskill once lifted a fully grown horse off the ground and over a nearby fence after it escaped. MacAskill reportedly only ever did this once, leading us to assume that the horse learned its fucking lesson and never once tried to test MacAskill’s patience or arms again lest it be unceremoniously hurled into the atmosphere at Mach 3.

MacAskill spent much of his life in a remote fishing village in Nova Scotia where his strength allowed him to earn a decent lifting incredibly heavy things. Although most locals greatly appreciated and took advantage of MacAskill’s prodigious strength, the fact he could often quite literally do the work of several men on his own resulted in many resenting him. This eventually saw MacAskill being endlessly belittled and mocked by local sailors whom he was somehow able to resist punching so hard their skeleton’s exploded.

This isn’t to say MacAskill took the abuse lying down, it’s just that he usually responded to it in a more subtle and dickish way. For example, MacAskill once found himself being laughed at whilst he was emptying a boat of bilge water by a bunch of sailors performing the same task nearby. MacAskill responded by grabbing the boat and lifting it clean off the ground then, while maintaining unflinching eye contact, he slowly turned the boat over, emptying out all of the water at once. He then sat and watched the sailors take several minutes to perform the same task with buckets in total, pants-shitting silence.

On another occasion a group of locals decided they’d try and and test MacAskill’s strength by asking him to help them move a boat and then not helping at all, just to see if he could do it. Being a nice guy MacAskill of course said yes when asked if he could help, not realising the ploy that was afoot. After trying and failing to move the boat MacAskill noticed that instead of helping him, the others were pulling in the opposite direction. Annoyed MacAskill walked to the centre of the boat and tore it in half with his bare hands and then dragged his half to the water.

By far MacAskill’s greatest and pettiest display of strength though also arose as a result of him being mocked by a bunch of sailors who you’d think would have learned to stop fucking this with guy, but whatever. The story goes that after seeing MacAskill carry several large pieces of timber, the sailors jokingly dared MacAskill to carry a nearby anchor weighing around 3000 pounds. MacAskill initially ignored the challenge until the sailors’ insults began getting a little too personal at which point he simply asked who the anchor belonged to. When the sailors explained that it was for their boat, MacAskill grabbed it and using all his strength, lifted it to his shoulders and carried it to the end of a nearby wharf where he knew it’d be a pain in the ass to retrieve.

MacAskill then presumably looked at the sailors with a look that just dared them to try and start some shit before flexing his thigh muscles so hard he shot into the sky like a giant man-shaped bird.