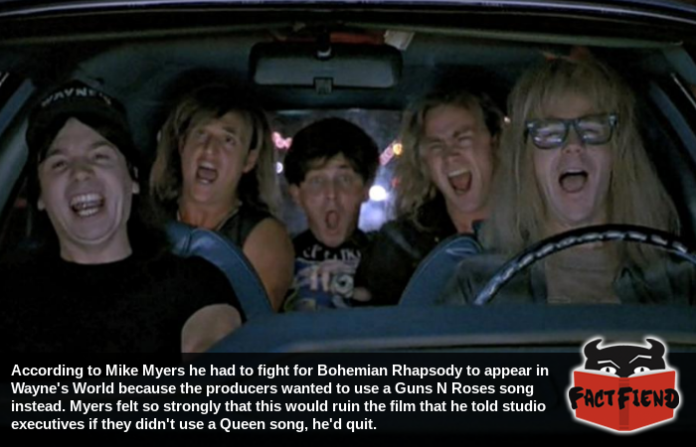 Cramming a film’s soundtrack full of Queen songs is the cinematic equivalent of rolling a turd in glitter in to hide the smell. This said, the trick has been used to great effect in several quite good films, like Wayne’s World, a scene actor Mike Myers fought tooth and nail to have included.

If for some inexplicable reason you clicked this article without knowing what in the hell we’re talking about, in the film Wayne’s World there’s a scene in which the titular Wayne and his heavy metal loving friends make their way to a nightclub in what might just be the coolest fucking car in cinema history.

During their journey, partly to get appropriately pumped up for their night of revelry and partly because it’s awesome, the gang decide to listen Bohemian Rhapsody on tape at max volume. 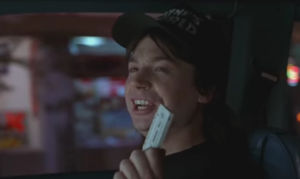 What follows is one of the most parodied scenes in movie history as the occupants of the car proceed to rock the fuck out to the song, banging their heads up and down harder than a snake with it’s tail caught in a ceiling fan. Before we continue, fun fact about the headbanging, according to a producer, the guys cast did this so hard that half of them ended up with severe neck pain afterwards. Then again, that’s rock and roll, baby.

The thing is, that scene almost didn’t make it into the movie because producers working on the film didn’t want to use Bohemian Rhapsody because Queen weren’t all that popular in the States at the time. In fact, the original plan was to use a Guns N Roses song for the bit because they had a number one single out at the time. Mike Myers, who is a massive Queen fan in real life, apparently got super pissed upon hearing this news and demanded to speak a producer about it. After said producer explained to Myers that Guns N Roses were hot at the time and it made more financial sense to use one of their songs in the film, he told them he didn’t care. In fact, Myers was so annoyed about this change that he threatened to quit if they dared replace Bohemian Rhapsody. In case you forgot Myers was playing the title fucking character of the film so him doing this would have inevitably killed the entire project. Myers is that big a fan of Queen. 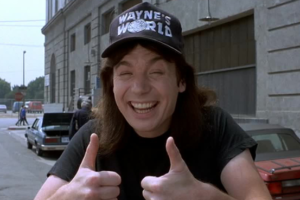 And it worked, because the scene ended up being one of the most memorable in the film. Which is all well and good but the real question is, what did Queen think of it? The answer to which is, they apparently loved it.

You see, Myers was insistent on getting approval from Queen themselves about the scene and sent Brian May a tape of it. May then took the tape and played it for an ailing Freddie Fucking Mercury who burst out laughing at it because, and this is amazing, Queen would apparently do the exact same thing when they were on the road and they head the song on the radio. Yes, you read that correctly, Queen would headband to their own song when they heard it on the radio whilst laughing their asses of. 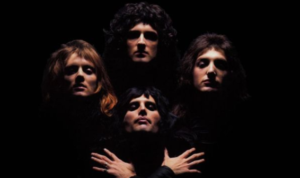 May was so thankful for the joy the clip brought Mercury in his final days (he sadly died before the final film was released) that he sent Myers a signed guitar which is one of the actor’s most treasured possessions.