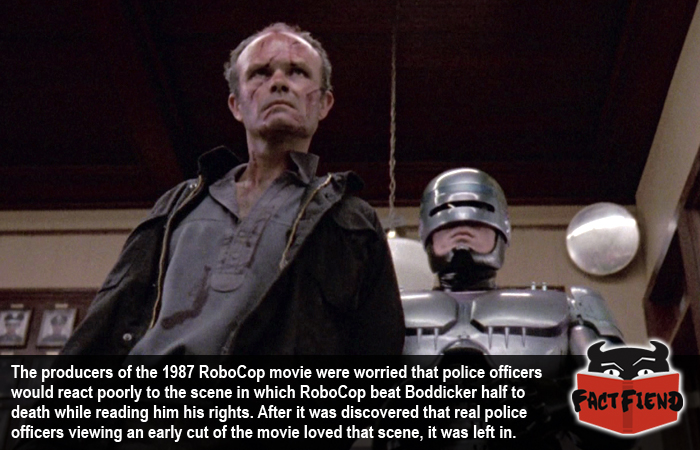 Robocop is arguably one of the best movies ever made, if only because it contains an entire scene dedicated to shooting a rapist right in the penis. But did you know that when the movie was first screened for police officers (for reasons we’ll discuss in a moment) they loved the idea of RoboCop beating an unarmed suspect to within an inch of his life.

If you’ve never seen the original movie, watch this scene in all of its 240p glory and tell us it isn’t the single greatest action scene you’ve ever had pumped into your eyeballs. If the image of an invincible sentinel of justice shooting a bunch of criminals in the face and dick while they ineffectually pepper his titanium chest with bullets that may as well be spitballs doesn’t cause you to at least smirk, you’re probably dead inside and hate rainbows and we’re sorry to have to tell you that.

Regardless of how objectively awesome scene is, the movie’s director and producers were genuinely worried that that real police officers might take offence to one part of that scene in particular, specifically the part in which RoboCop beats an unarmed suspect while reading him his rights. Their major concern was that the police would take offence to Robocop, you know, beating the piss out of an unarmed suspect, since that sort of thing is spectacularly illegal in most states.

So, to test out whether or not the fuzz would be annoyed or offended, a very early cut of the film was shown to a bunch of them to gauge their reaction to a police officer throwing an unarmed suspect through a plate glass window. Amazingly the overall reaction from actual police officers was that the scene was  a work of genius.

Apparently the officers at the screening thought it was all kinds of satisfying to see RoboCop punish a bad guy in a way they couldn’t. Yes, you read that correctly, police officers were perfectly fine with a scene in which a supposedly “perfect” robot policeman blatantly broke the law because the guy he was beating half to death kind of deserved it. Because screw all of that “innocent until proven guilty” stuff when the guy’s a dirtbag, right?