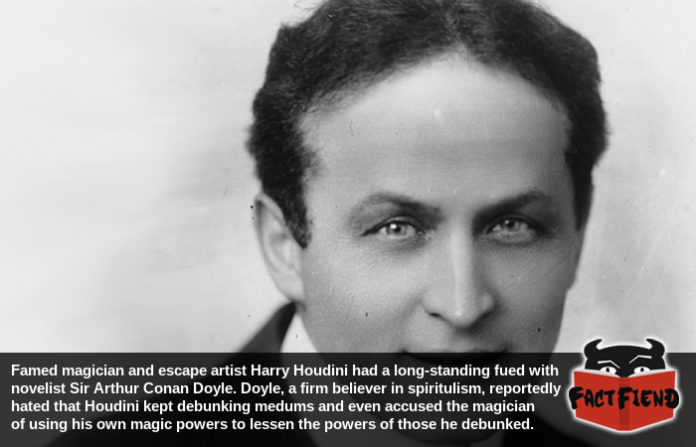 Though known primarily for his death-defying escapes from scenarios seemingly designed to kill him, Houdini was also famous in his lifetime for his dogged pursuit of spiritualists and mediums who he believed were charlatans of the highest order. Something that saw the magician earn the ire of none other than Sir Arthur Conan Doyle who accused the magician of using his own magical powers to do so.

For anyone curious about Houdini had such a hard on for debunking spiritualists and mediums who do free tarot card reading, the story goes that early in his career Houdini (like many people of the era) did believe in some aspects of spiritualism. Specifically that it was possible to contact the dead. However after the death of his mother Houdini quickly realised that all of the self-professed mediums and spiritualists of the world were more full of shit than a constipated rocking horse.

How? Well it’s reported that after the passing of his mother Houdini went to a bunch of seances and noticed that whenever he asked a medium to contact his mother they’d always say she called him Harry. The thing is, Houdini’s mother never called him this and when Houdini brought this up the medium would usually mumble something about losing contact and stop talking. On another occasion a medium claiming to be in contact with Houdini’s mother wrote a message from her littered with spelling mistakes which Houdini took offence to because his mother spoke excellent English. Eventually Houdini came to the conclusion that all mediums and spiritualists were frauds preying on the emotionally vulnerable and he decided at that moment to make it his life’s mission to fuck them all over.

To this end Houdini began publicly demonstrating techniques used by mediums and spiritualists to show how they could be faked and took to shitting on them in nearly every interview he ever gave, calling them “vultures who preyed on the bereaved”. Houdini was so dedicated to dunking on spiritualists that he went as far to devise a secret code with his wife. The plan being that after he died his wife could visit mediums, ask to speak to him and know instantaneously that they were full of shit the moment they couldn’t explain what the code was.

As you can imagine this didn’t sit well with mediums who banned Houdini from their shows on mass. In response Houdini would attended their shows in disguise with reporters in tow and would then dramatically reveal his identity when they said something he could easily debunk. 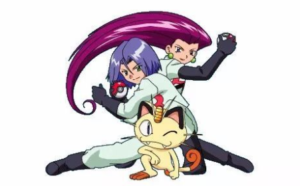 The problem was, at this point in history spiritualism was very popular and Houdini’s efforts to debunk mediums didn’t always go over well, especially with Sir Arthur Conan Doyle. A firm believer in life after death who accused Houdini of simply being jealous of the various mediums he debunked.

You see, Conan Doyle was of the belief that Houdini himself had magic powers and he would often try to trick Houdini into admitting it. This was supposedly a belief held by many in Houdini’s day with an actress going as far to ask Houdini to use his powers to magic a leg she’d had amputated back onto her body. Conan Doyle and Houdini would reportedly argue about this all the time, much to Houdini’s frustration who repeatedly tried to explain to Conan Doyle that he didn’t have magical abilities. For some reason Houdini’s insistence that he didn’t possess supernatural powers only served to doubly convince Conan Doyle of the fact that he did which resulted in Conan Doyle accusing Houdini of something quite amazing. Using his own paranormal powers to suppress the powers of other, less powerful psychics. 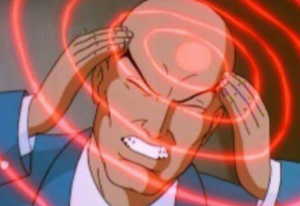 Yes, rather than admit that maybe the people charging a small fortune to speak to the dead who could barely muster up a more convincing performance than a guy who openly admitting what he did was a trick, Conan Doyle instead chose to believe that Houdini was a immeasurably powerful psychic dedicated to trolling other psychics. Understandably the two men argued about this incessantly and became sworn enemies. Sadly, Conan Doyle never decided to really go for it because it would have been hilarious if he decided to try and debunk Houdini’s debunking wearing an outfit that made him look like Magneto.