Aliens is one of the greatest movies ever made and it’s hard to imagine a world where it doesn’t exist and we only had footage of Bill Paxton being killed by a Terminator and a Predator. Apparently though, the film was almost stopped in its tracks by the British production crew and their insistence on drinking tea, as well as an asshole assistant director who tried to ruin all the shots.

Despite the success of the original movie, Fox didn’t really give James Cameron all that much money to actually film the sequel (about $18 million according to most reports) and lumbered him with an incredibly tight deadline they wouldn’t budge on leaving him only 75 days to shoot the movie. This obviously left Cameron stressed and keen to get a move on with production, which didn’t suit the British crew he was given to make it.

According to everyone involved with production Cameron would get into daily screaming matches with the British crew, mostly due to their insistence on taking breaks every hour or so to stop for a cup of tea. This annoyed Cameron to no end because it brought production to grinding halt every hour and it’s reported that the crew gave such a colossal lack of fucks about the project they’d leave in the middle of shooting special-effects laden scenes it took hours to set up. People present report Cameron lining up a shot for the reveal of the Alien queen only to have the crew stroll out as he was about to yell action, leaving all the cool alien mist to float out of the studio’s front door like the ghost of a forgotten fart.

Remember, this was filmed in England so the crew already had a pretty fucking solid union contract that gave them an hour lunch break as well as a morning and afternoon break and they still felt like they needed an extra 10 minutes for a cup of tea whenever they felt like it. Initially Cameron tried to placate the crew by explaining that he wanted the film to be success, explaining his vision of the movie by showing them an unreleased cut of The Terminator to show that he wasn’t a hack. This failed to impress the crew, who walked out in the middle of shooting one day at the behest of assistant director, Derek Cracknell.

Far from wanting to champion the rights of the working man, Cracknell arranged the walkout in an attempt to torpedo Cameron’s position as director because he felt like he’d direct the film better. A similar sentiment was echoed by the director of photography, Dick Bush. So what ideas did these two men who weren’t the guy’s who directed fucking Terminator have that Cameron didn’t have the vision to implement? How about lighting the Alien nest with giant spotlights? You know that scene that in the final movie is only lit by the light of small flashlights, highlighting the devastation caused by the alien infestation and making the marines look insignificant and powerless even though they’re holding giant guns? 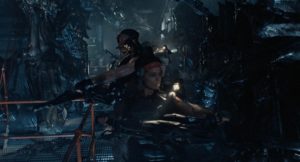 Wouldn’t that have looked way better bathed in 80,000 lumens of eye fuckingly bright studio spotlights? Cameron didn’t think so either and calmly told both men that if they didn’t support his vision of the film, they could fuck off the edge of his dick, firing them both. The director also came this close to firing all of the British crew too but ended up not doing so when they agreed to actually do some work.

According to reports from people who were there, on the 75th day of shooting Cameron gathered every member of the crew and told them that the only thing that had kept him going during production was knowing that when he was finished, he could leave and never come back while they’d be stuck there. Cameron then announced that shooting was completed and walked out of the studio.