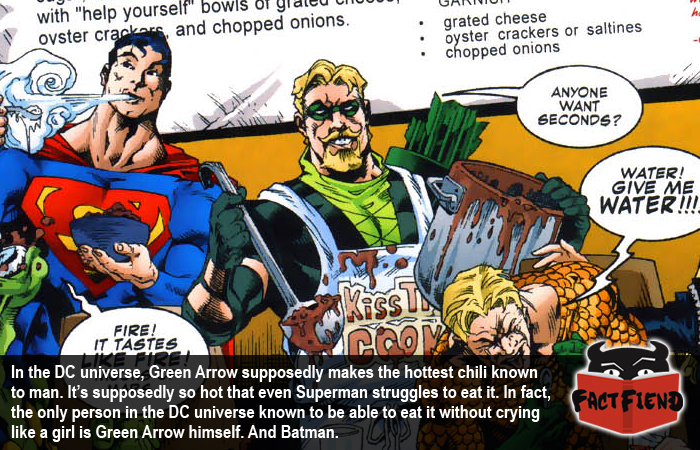 Green Arrow is generally regarded as the finest archer in the entire DC universe, presumably because he’s the only fucker stupid enough to use a bow and arrow in a world where omnipotent aliens with lasers eyes exist. But shooting arrows isn’t his only skill because according to the comics, he can also cook (and eat) the hottest chili in the entire world. And hey, you can make it too, because, well, wouldn’t you like to know what Batman’s favourite food tastes like?

As you can see from the image above, Green Arrow’s chili, officially known as Ollie’s Stupendous Chili in DC canon, because Green Arrow is like a kid playing Pokemon for the first time when it comes to naming things and because he’s also an asshole, is so hot even Superman, literally one of the the strongest beings in the entire fucking DC universe, is struggling to eat it.

Just so you’re clear about how hot this stuff really is, just off frame in that picture, Martian Manhunter, The Flash and Green Lantern are all being made this chili’s bitch, like, so hard. In fact, it’s noted in the comics that every person, super powered or otherwise, who has ever tried to eat Green Arrow’s chili has screamed in pain the second they put it into their mouths. The only known exception is Green Arrow himself and Batman, who is so blasé about the whole “eating a chili hotter than the beating heart of a sun” thing, that he’s willing to openly criticise the recipe while Hal Jordan has an existential crisis about what his life has become right behind him.

But here’s the best part, DC comics have released the official recipe for how to make this stuff, meaning if you have the balls and the correct ingredients, you can see if you’re man enough to eat Batman-tier chili.

We’re not going to lie, this chili contains some pretty nasty ingredients, including gebhardt and cayenne chili. Sure the hot sauce aficionados amongst you may scoff at such ingredients, but if you’re the kind of person who prides himself on being able to eat really hot food and acts like a dick about it, you’re probably also the kind of person Batman would hate anyway. For everyone else, we invite you to try out the recipe yourself. Because is there really a better way to spend a lazy summers evening than giving yourself self-inflicted intestinal burns to try and emulate Batman? If there’s an answer to that, that isn’t just the word “Fuck No” in capital letters, we don’t want to know what it is.