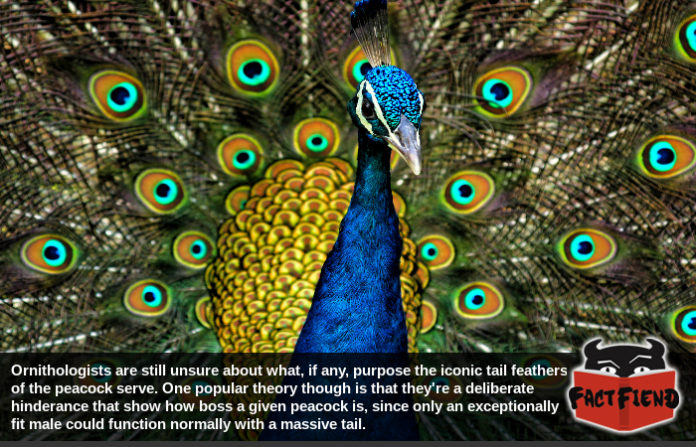 Few animals are as brazenly fabulous as a male peacock. Oddly, despite the large fan of feathers located on the ass of the animal being its most well-known feature, there’s still no scientific consensus about what they actually do. One rather awesome theory though is that they’re a deliberate hindrance males put up with because it advertises how awesome they are to both mates and predators.

You see there’s a concept in evolutionary biology known as honest signalling. Basically it’s proposed that some animals advertise handicaps they have honestly to the world as a deliberate show of strength. For example, we’ve talked before about how it’s theorised that gazelles style on cheetahs by leaping into the air and splaying their legs awkwardly while being chased to show that they have energy to spare, hopefully demoralising the cheetah into giving up. Basically they purposely handicap themselves to show that they don’t give a fuck and could escape without even trying all that hard, in essence, honestly signalling that they’re exceptionally fit and not worth chasing. Or at least, that’s the theory.

In regards to peacocks, the theory is that the giant-ass fan of feathers sported by a male peacock are a similar honest signal, signalling that the male is so fit and healthy it can function normally with 8 pounds of ass feathers slowing it down. To this end it’s proposed by some experts, such as this guy, that longer tail feathers are only sported by the strongest males of the species since only the most boss-ass peacocks can fly and walk around with them without it affecting their ability to do peakcock stuff.

In short then, it’s believe by some that longer tails are a shorthand way of males advertising their superior genes to females, as a lesser peacock would be unlikely to survive with such a massive and easily exploited weakness.

As of the time of writing this, this theory is somewhat contentious and the idea of honest signalling itself is still one that has yet to be conclusively proven. However, we think it’s worth noting that somewhere out there, there are experts who genuinely believe peacocks deliberate handicap themselves and struggle around with the human equivalent of a 3 foot long penis. Not because it looks good, but because evolution tells them that lady peahens totally dig it even though it likely makes having sex infinitely more difficult.