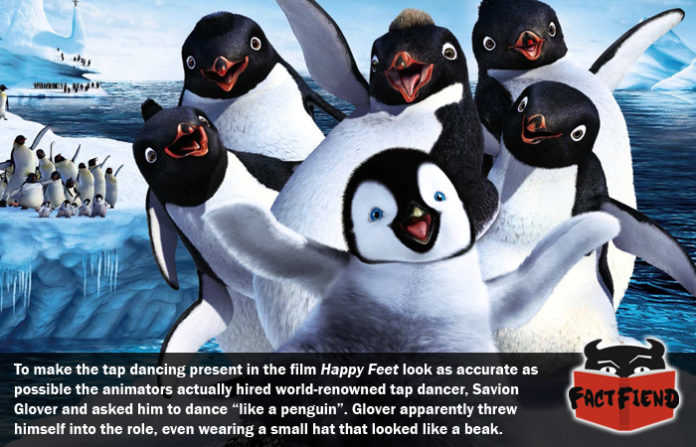 Happy Feet is a 2006 movie inexplicably written and directed by the same guy who wrote and directed Mad Max: Fury Road. In a nutshell it’s about a tiny penguin who learns to express himself through the power of dance and for some reason the animators felt that they absolutely had to use an actual professional tap dancer to mo-cap the whole thing.

That tap dancer was a dude called Savion Glover, a man widely considered the finest tap dancer alive today and the owner of a fucking amazing set of dreads. Glover is a dancing savant who could probably tap-dance the dictionary in Morse code while flipping you off, in short, he was the perfect man to provide motion capture for a penguin.

You see, it was decided very early on in the production process of Happy Feet that they would hire a choreographer to guide the animators for the dancing scenes. However, after hiring Glover to do just that, they discovered that the animators were kind of shitty at following his instructions, so they decided to just slap him in a motion capture suit and work with that.

Soon afterwards though it became apparent that Glover’s movements didn’t translate well into penguin movements due to the difference in their proportions. As a result, Glover and his back-up dancers had to learn to dance, like a penguin. This involved learning to look up while dancing, treating their arms like flippers and keeping their torsos rigid.

It’s also reported that to really get into the role of a penguin, Glover and his entourage also spent several days dancing with large hats that simulated beaks on their heads. While no footage of this exists, presumably because even someone with the nuclear levels of swagger Glover has couldn’t even pull that look off, it does make us appreciate that movie a little more knowing that, that tiny penguin’s sweet dance moves were mo-capped for real by a professional dancer.