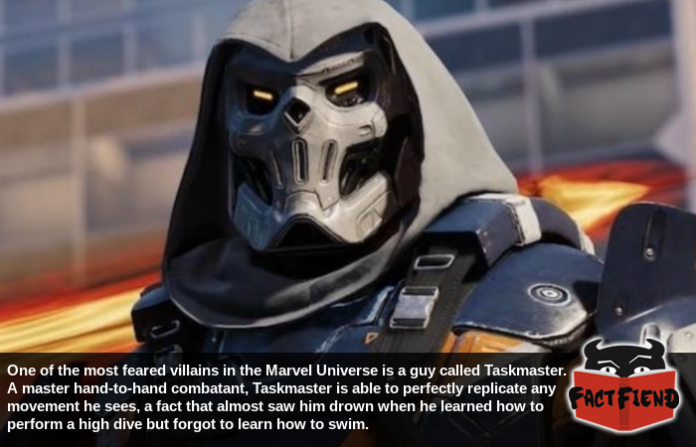 Tony Masters or The Taskmaster as he’s known to his friends and enemies, is a Marvel character known for being one of the most formidable villains in the entire world. A master martial artist, tactician and assassin, The Taskmaster is noted to be able to do pretty much anything. Except for swim.

This is because Taskmaster possesses what is referred to photographic reflexes which is comic jargon for he can perfectly emulate any physical action he sees without training or preparation. While there are limits to this ability (Taskmaster can’t, for example, emulate a feat that would require superhuman strength or speed) it is kinda broken what Taskmaster can do with it.

For example, Taskmaster has used his photographic reflexes to learn literally every fighting style on Earth as well as master the use of both melee weapons and guns. Not content with being proficient in all forms of armed and unarmed combat, Taskmaster has also learned to mimic the unique, hybrid fighting styles of famed heroes and villains across the Marvel universe. A fact that makes him arguably one of the most dangerous men in the world and a person who is able to kick the shit out of virtually any opponent. 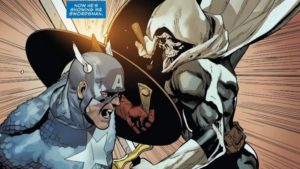 In addition Taskmaster has shown remarkable ingenuity in the utilisation of his powers using them to do things like learn new languages by observing the subtle movements a person’s throat makes when they speak and even predict how someone will move by memorising their fighting style to such an extent he just knows what they’re going to do next. This latter ability is apparently so broken that there’s pretty much nobody in the Marvel universe able to best a sufficiently well prepared Taskmaster in a fistfight with the apparent exception of Deadpool who’s so random his movements can’t be predicted.

Hell in one comic Taskmaster realises that if he watches martial arts movies at double speed he’s able to give himself a degree of superhuman speed whilst also looking incredibly stupid. However, a key limitation with Taskmaster’s powers is that he can only emulate things he sees, which sounds obvious but has resulted in the villain fucking up in rather comical ways.

For example Taskmaster can flawlessly recreate, say, a piano piece by observing it but would still be wholly unable to read sheet music or understand how the instrument is actually played. By far the dumbest example of this kind of thing happening though is when Taskmaster tested his powers as a child by emulating a cool dive he saw performed at a pool without realising that he couldn’t swim. Something that saw him almost drown and presumably, dislike water because holy shit is that an embarrassing story for a guy who bills himself as the worlds deadliest assassin.