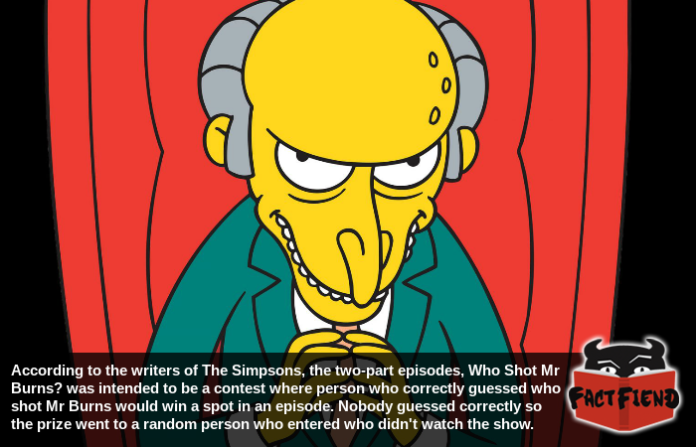 Who Shot Mr. Burns? is a two-parter episode of the Simpsons that revolves almost entirely around setting up and then solving the question posed by the title. Oddly, while the animators and writers filled the first episode with a bunch of clues they figured would give Simpsons super-fans a chance to work it out, nobody did.

If for some reason you’re reading this article and haven’t seen the episode we’re talking about, it is revealed in the second episode that it was Maggie Simpson who pulled the trigger. Erm, accidentally. 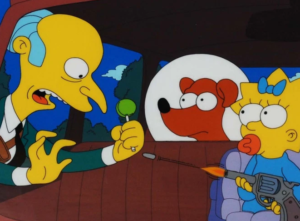 Now throughout the first episode their are dozens of clues subtly and not-so-subtly alluding to this. The most obvious probably being that during a shot where Mr. Burns is openly challenging the entire town of Springfield to put up or shut up, the only person who holds his gaze is Maggie.

Other clues include Maggie being the first person revealed during a gag involving a box of chocolates and him collapsing onto a sundial pointing to Maggie’s initials. From his perspective. 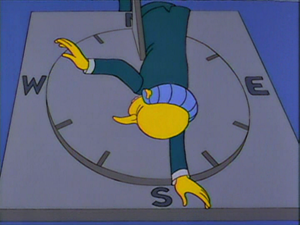 Other, details that aren’t necessarily clues about the identity of the shooter but were still included for super-fans to obsess over include bunch of Simpsons townfolk being revealed to have the exact same initials and a literal blink-and-you’d-miss-it shot of Mr. Burns collapsing revealing that a holster he shows off earlier is empty. Suggesting he was shot with his own gun. A detail they only included as the producers planned for people to record the episode and go through it frame-by-frame to search for clues.

With all these clues the writers were confident that someone would guess Maggie and worked with Fox to arrange a contest where the winner would be animated and featured in a later episode. Apparently the writers initially wanted the prize to be a million dollars but Fox turned that down.

A problem though was that the writers were so confident that someone would guess Maggie that they never bother to include a stipulation for what would happen if nobody guessed correctly. As a result, when they drew the required 1,000 random entries and noticed that nobody among them had put the correct the answer, they were forced to just pick a random incorrect answer and award them the prize.

Here’s where things get a little stupid though because the random person they ended up selecting, Fayla Gibson, wasn’t a fan of the show and had entered on a whim. For the curious, she guessed that Smithers shot Mr. Burns. As a result, when she was contacted about appearing in the show, she told producers she didn’t give a shit. Sensing the bad publicity that could arise from this news leaking, Gibson was offered a cash alternative instead. Which she took, completely knocking the wind out of the sails of the producers who’d kind of hoped to use the contest a publicity stunt. Instead they ended up just giving some lady a large, undisclosed amount of money for being lucky and wrong. Which to be fair, is a very Simpsons thing to happen.