Wreck-it Ralph contains so many video game cameos that listing them all take an entire article by itself, so we’ll just make everyone day a little easier by saying there’s a lot. Curiously, the most difficult part of cramming all these famous video game characters into the movie wasn’t securing the rights to them, it was animating them in a way the respective rights holders would be okay with.

To explain, when the idea for Wreck-It Ralph was first conceived, they didn’t actually bother to secure the rights to any of the dozens of cameos they wanted to include. The creative team instead decided as unit where the best place for each character to appear would be, after which they’d then approach whomever held the rights to that character to see how open they’d be to allowing the character to appear in the film.

In the case of Nintendo, according to the director Rich Moore, they were very amiable when it came to using their intellectual property in the film and were even open to the idea of them using Mario, their flagship character, in some capacity. While the creative team never found an appropriate way to include Mario, they did find a neat way of including Bowser, the Bad-anon help group.

If you’ve seen the movie, you’re probably aware that Bowser doesn’t really do anything in that scene save for drinking a cup of coffee and giving Zangief the biggest “I know that feel bro” look in movie history. 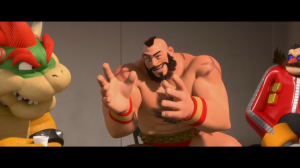 Even though Bowser barely fucking moves in that scene, Nintendo basically walked Disney through how they felt Bowser would react to pretty much everything that happened, up to, and including, how the gaming icon would drink his god-damn coffee. According to Moore, when an early draft of the Bad-anon scene was shown to Nintendo big-wigs, literally one of the first things they said was “he wouldn’t drink his coffee like that“.

Something else that was frustrating for Disney was the unending dick-measuring contest between the various game studios about how big their character should be. Nintendo for example felt that Bowser, along with drinking his coffee like an idiot, had to be bigger than Ralph and Zangief. In response, Capcom said that Zangief and M.Bison had to be taller than Dr Robotnik. When Sega heard that Capcom had been shit-talking their series, they tried to argue that Dr Robotnik was “a very tall gentlemen” and thus had to be taller than everyone.

And that’s the image we’d like to leave you with today, a bunch if video game company executives bitterly arguing about whose character was the biggest while a Disney official stood shaking his head.