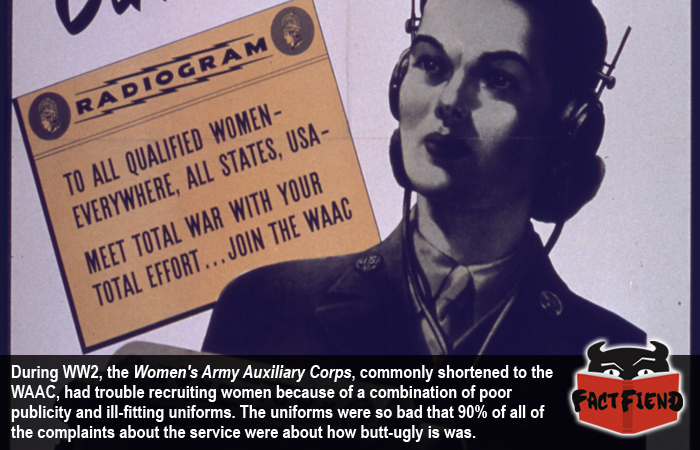 One of the perks of joining the military is getting to wear the fly-ass, fitted uniform they give you when you join. However, for the brave women who signed up for the WAAC, the uniform they were forced to wear was so bad, it literally caused people to reconsider joining up.

First though, a history lesson. The Women’s Army Auxiliary Corps was a branch of the military created in 1942 for the purpose of moving men away from some of the more menial military positions and into more combat orientated roles. However, as you’re probably aware, the 40’s and 50’s weren’t exactly a progressive time and from the moment it was created, the WAAC came under scrutiny from men who didn’t want any women girling up the army. There was also a small subsection of men (read: assholes) who positively loathed the fact women were taking away all of the “safe jobs” in the military.

This didn’t stop thousands upon thousands of women joining up to do their part though, because women in the 40’s didn’t dick around. According to practically every military officer who worked with the WAAC who wasn’t a huge misogynistic wang, the women of the WAAC were remarkably disciplined to the point General MacArthur called them his best soldiers, even going as far to say that the women working for him were better trained and more reliable than the men under his command. However, there was one thing stopping women from joining up, the terrible, ill-fitting uniform members of the WAAC were forced to wear. 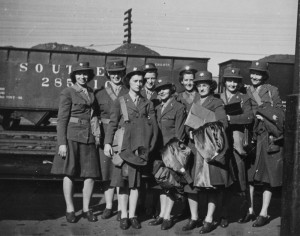 Now we’re not going to make some shitty joke about women being obsessed with clothing because one, we’re not assholes and two, because these uniforms were objectively terrible because they were designed to fit men, not women. Now you may think looking at the image above that the uniform looks reasonably okay, it’s not the most shapely or form-fitting thing in the world, but it doesn’t look that bad, beside it’s a military uniform, it’s not supposed to look good, it’s supposed to be functional. Here’s the thing though, the uniforms didn’t work, like at all, because along with being uncomfortable and ill-fitting the uniforms were so cheaply made they didn’t actually provide the women wearing them any protection from the elements. Don’t let the smiles of those women fool you, that uniform really was a huge problem, to quote Mattie E. Treadwell on why the uniforms sucked so much.

“All garments were cut with wide collars and narrow hips, as for men; skirts, shirts, and jackets were for this reason generally ill fitting, uncomfortable, and unbecoming to the average woman. Hats were out of shape before they were issued; raincoats leaked at every seam in even a light shower; seams of hems were sewed down so that they could not be easily raised or lowered, and some garments had no hems at all. The suspenders on girdles were too short and pulled runs in stockings”

To top it all off, almost every woman, even the ones working in roles that required them to move around and you know, help with the war effort, were asked to wear incredibly tight, short skirts, even if they were doing physical exercise, which as you can imagine, sucked ass. Seriously, just check out this image of women in the middle of basic training.

So not only were these women forced to wear ill-fitting uniforms that leaked and didn’t fit their figures, but they also had to wear short skirts that left them frustratingly exposed to the elements because the Army didn’t think they’d ever need to do anything more strenuous than stand perfectly still. It’s actually embarrassing that men back then thought women weren’t fit for military service when they were able to do their jobs more efficiently while complaining less in a more restrictive uniform.

According to Gallup polls from the time, the uniform was listed as one of the things that put women off joining the most and it was so ugly that thousands of people sent in letters offering advice on how to make it better. It was even at one point suggested that women in the WAAC should have been able to just buy there own uniform because at least then they could have been sure that it’d fit. In short, this uniform was bad that it literally cost the army thousands of potential recruits.

For anyone more curious about the uniform itself and what it’d look like if it were actually fitted, we invite you to go check out this gallery of modern women wearing the various uniforms of the WAAC hosted by BlitzkriegBaby.com, because they’re fucking awesome.