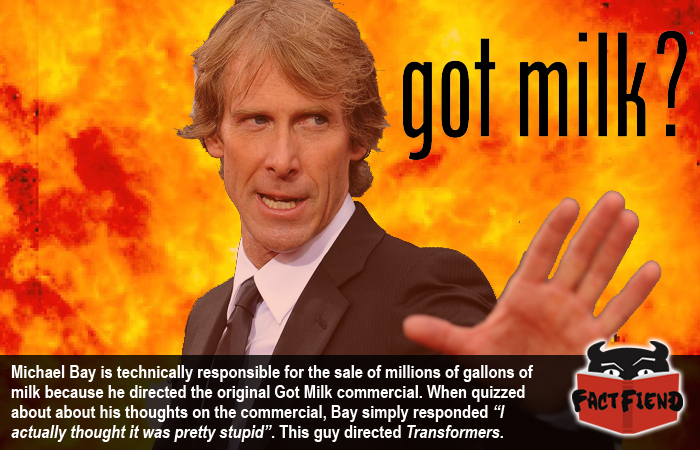 Michael Bay is mostly known for two things, making stupid movies and making really stupid movies. His IMDB profile reads like the kind of DVD collection you’d find in the house of a 13-year-old who stole their parent’s credit card. But nestled at the bottom of his profile page is a credit that has earned him near universal critical acclaim and he freaking hates it.

To explain, Bay directed the first Got Milk commercial to hit our screens in 1993. The commercial which is simply titled “Aaron Burr” shows a man surrounded by historical paraphernalia eating a peanut butter sandwich, when suddenly his phone rings and he’s asked to answer the question “Who shot Hamilton in that famous duel?” in order to win $10,000. The man, who is clearly knowledgeable on the subject confidently glances around his room which is full of artefacts from that very duel and splutters the answer “Aaron Burr” down the phone. However, his mouth is just too full of sandwich to be understood, frantically the man reaches for a carton of milk only to realise, oh no, he’s all out. The voice at the end of the phone pushes the man for an answer but he’s unable to remove the matted sandwich paste from his mouth, while he solomnly looks at the receiver, the sound of a dial tone is heard before the screen smash cuts to the now iconic phrase, “Got Milk” on a black screen.

The ad has gone down in history as one of the finest ever made, winning several industry awards and critical praise from industry experts and media theorists alike. In fact, it was so popular that in 2002, 9 years after the ad first aired it was brought back to TV because of “popular demand“. Making it one of the first ads in history to be re-aired because the public wanted to see it again.

According to experts, as a direct result of the advert, sales of milk increased for the first time in over a decade with an extra 15 million gallons of the white stuff being sold in California alone. Thanks to the ad, and by extension Michael Bay, it’s noted that the perception of milk was changed nationwide, from a bland boring drink we tolerated out of politeness to something all of the cools kids drank.

Which makes it so strange that Michael Bay really doesn’t like the ad. In an interview with TMZ, which a polite way of saying “they hassled him with questions while he was waiting for a cab” Bay revealed that he thought the ad itself was pretty stupid and that he presumably didn’t enjoy the experience.

But we digress, the next time you enjoy a cool glass of milk, you should probably raise your glass to Michael Bay because he played a small, but nonetheless crucial role in making it cool again. So thanks, Michael.