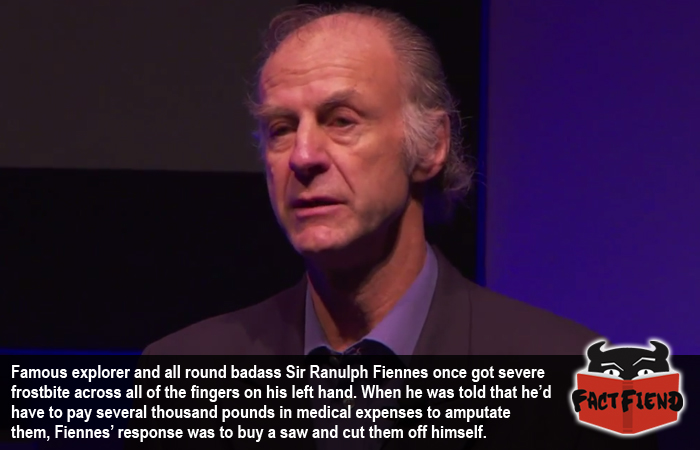 According to the Guinness Book of World Records, Sir Ranulph Fiennes is the world’s greatest living explorer. According to us, he’s a Liam Neeson character who escaped from the realm of film to punch our world in the dick.

To list all of the crazy, badass shit Sir Ranulph has done in his lifetime would take a dozen articles written in shotgun blasts in the side of an erupting volcano. The man was a member of the SAS, aka, one of the most feared and respected military units in the world, but was forced to leave when he tried to blow up a dam in the UK. When asked why, he simply explained that the dam was ugly, when asked where he got the explosives from, he said that it was “leftover” from a training exercise, when asked how the hell he had “leftover” explosives, he casually remarked that he was just really good at blowing things up. Unsurprisingly, the SAS weren’t overly keen on prosecuting such a baller individual and he was essentially let off after paying a fine. If you still don’t think this man is testicular fortitude personified, we’d also like to mention Sir Ranulph was the only member of his group that didn’t get physically caught because he’d already completed a course on avoiding attack dogs.

But enough about that, we’re here to talk about the time Sir Ranulph tried to walk to the North Pole, unassisted just because and nearly lost his left hand. After his sled fell through a portion of particularly thin ice during his trip, Sir Ranulph was forced to plunge his left hand into Arctic water to retrieve it, as a result, he developed severe frostbite along the tips of all the fingers across that hand.

After being airlifted to safety and having a emergency surgery to take care of the immediate damage, Sir Ranulph was sent home to the UK where his local medical officials told him he’d have to wait several months for surgery to remove what was left of the rotting, necrotic flesh on his hand. Doctors wanted flesh that had only been slightly damaged to heal before the decided to crack out the scalpel in order to save as much of Sir Ranulph’s hand as possible. However, Sir Ranulph is an impatient man and upon being told he’d have to wait almost half a year just for an operation, during which time he’d have to pay thousands to keep his hand from getting infected, he decided he needed a second opinion, from a hacksaw.

Unable to deal with the waiting or the constant screaming pain the injury was causing him, Sir Ranulph walked to his local store, bought a saw and then proceeded to saw off the parts of his hand he couldn’t feel any more.  Five days later, his injury had been taken care of. Remember that the next time you stub your toe.