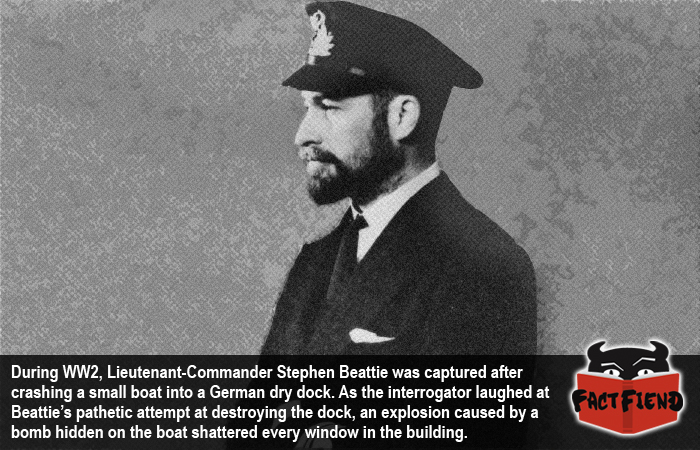 Captain Stephen Beattie may not have the longest Wikipedia page in naval history, or even the coolest name, but he sure as hell has one of the coolest stories from WW2. We are of course talking about the time he led what has gone down in history as “the greatest raid of all “.

Unless you’re a military buff, it’s highly likely you’ve never heard of The St Nazaire Raid (sometimes known as Operation Chariot), which is a shame because as noted above, it’s regarded by historians as one of the greatest raids conducted in the history of war.

So why was this raid so impressive you ask, your face contorted into a curious frown? Well, it’s because the raid accomplished something many at the time deemed impossible, the destruction of the Normandie dry dock. The dock was one of the most heavily defended naval fortification in Europe, mainly because it was one of the the few places in Europe large enough to accommodate massive German warships like the Tirpitz.

The German’s were incredibly keen to defend the dock because without it, if the Tirpitz or its sister ship the Bismarck were damaged, the only place they’d realistically be able to undergo repairs would be Germany and nobody wanted to go there. As such, the defences around the dock were so impenetrable that both the British Navy and Air Force outright refused to undertake a mission to destroy it because fuck that. In the end, the British government turned to the only group of men with the testicular density to undertake a mission so hopelessly doomed to failure, the Commandos.

The British reasoned that the dock was so well defended that the German’s would never expect a suicidal direct assault, so that’s exactly what they fucking did. Before the mission began, an old piece-of-shit destroyer that formally belonged to the US Navy, HMS Campbeltown, was lightened and then filled it to the brim with explosives. Once the Campbeltown had been modified and made all, explodey, the British literally sailed in a straight line until they reached the dock’s front gate and then crashed right the fuck into it.

Since suicidal direct attacks rarely work without back up, the Campbeltown was flanked on this mission by a number of smaller boats carrying really pissed off Commandos, who began to attack the dock like it owed them money as soon the boat became grounded. During the ensuing fight, 169 of the 622 men who took part in the mission were killed outright while a further 205 men were captured, amongst them was then Lieutenant-Commander Stephen Beattie. After the Campbeltown crashed into the dock, Beattie, who had been commanding the ship, was captured and dragged off to be interrogated, which is where our story gets kind of awesome.

As noted in the book, Tirpitz: The Life and Death of Germany’s Last Super Battleship, during his interrogation, Beattie was confronted by an incredulous English-speaking German officer who simply could not believe that the British had sent such a tiny boat to destroy such a large, well-defended dock. The legend goes, that just as the German officer finished laughing about how the dock could never be destroyed by such a ill-equipped ragtag group of assholes, the Campbeltown’s belly full of explosives exploded, instantly destroying the dock.

Beattie was later awarded a Victoria Cross before being promoted to Captain, presumably for that moment alone. 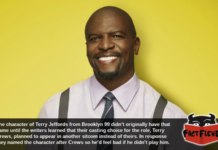