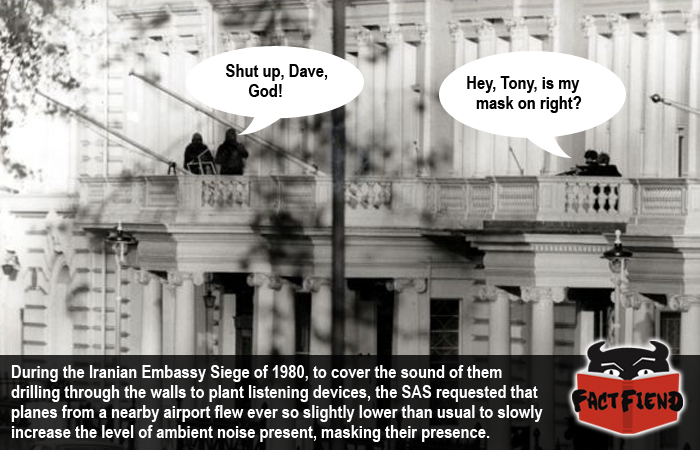 It’d be an impossible feat to talk about all of the people who made the rescue of hostages during the 1980 Iranian Embassy siege possible, so today we’re just going to talk about the pilots who played a small, but crucial role that fateful day 34 years ago.

For those of you who have no idea what we’re talking about, on April 30th 1980, 6 men armed with guns stormed the Iranian Embassy in London and took close to 30 people hostage for almost a week. After a few days, the gunmen, feeling that the British Government were dragging their heels in regards to meeting their demands, executed one of their hostages and callously threw their body over a balcony to make a point.

In direct response to this, the British government instructed the SAS (those guys in Call of Duty: Modern Warfare who wore the bitchin’ masks) to go in their and kick some ass and break the siege. Which they totally did.

As soon as they had their orders, the SAS quickly organised a mission to rescue the hostages which they codenamed Operation Nimrod, presumably just to see who would dare laugh at it.

Now the first part of any successful mission is reconnaissance, and although the SAS had vague information about the people inside the building and the floor plans to the embassy itself, it wasn’t enough for them to rush in and start splitting wigs like it was going out of style. However, there was a problem, the terrorists were rightly rather skittish and attempts to drill into the walls from the embassy next door caused them to become dangerously agitated. A quick thinking hostage in the embassy managed to convince the terrorists that the noise was just mice, but such a paper thin excuse couldn’t hold up to much scrutiny and the SAS were forced to come up with a plan. An ingenious plan.

Realising that they couldn’t make less noise, the SAS instead asked everyone else around them to make a hell of a lot more. At first they requested that the British Gas Board begin drilling nearby, a request that was almost immediately honored because road works only take an age to sort out if you don’t make the arrangements with a gun in your hand. However, the terrorists soon became suspicious of this noise too, because apparently even they knew that road workers actually doing their jobs for 9 hours straight didn’t make sense.

So the SAS were forced to come up with a better plan, which is when it hit them, why couldn’t they just ask planes from a nearby airport to fly a little lower? An idea we’re assuming they came up with when they noticed that the word “plane” has the word “plan” in it.

Like with their previous request, airline officials quickly complied and almost immediately planes were being diverted over the embassy with their pilots flying just a smidge lower than they would have normally. The ambient noise this provided allowed the SAS to safely drill their holes and plant their listening devices, thereby giving them access to vital information that was no doubt crucial to the rescue of the hostages a few short hours later.

So the next time you want to complain about an plane flying overhead, just remember, the government is probably trying to bug your home.