The great white shark is easily the most eminently recognisable fish on the planet, long, strong and clocking in at over 2 tons of fun when fully grown, the great white would no doubt be the crowning, shark-shaped jewel of any aquarium. Or they would be if the sharks didn’t immediately die the instant they were put into a body of water they didn’t own.

You see despite immense interest from some of the most powerful people on Earth (at least as far as fish are concerned) and millions of dollars of investment there has never been a great white shark that has been successfully held in captivity. In fact, the longest an aquarium has ever managed to keep a great white captive is a mere 198 days, after which they were forced to release the fish because it kept attacking and killing other sharks out of frustration and presumably to show everyone what was up.

Disregarding that and a few other outliers no great white has ever lived more than a handful of days in captivity with most dying hours after they’re put into a tank for seemingly no other reason than they refuse to submit to man’s will. In cases where the sharks don’t immediately die upon coming into contact with water owned by an aquarium, the sharks will often be released just days later due to them either refusing to eat or attacking everything in their tanks.

Hell on one occasion a shark died after three days in captivity after spending three straight days headbutting the side of the tank it was held in. Something that was later attributed to the shark’s sense of electroreception being affected by the glass and confusing it. Which makes sense but just for a moment imagine being in that aquarium during those three days before this was proposed as the cause of this behavior. Imaging knowing how much great white sharks hate being in captivity and that they seemingly somehow know that something is amiss when they are. Then imagine trying to convince yourself that a metric ton of evolutionary potential doesn’t know that you are holding against its will as it crashes directly into the glass your observing it through. 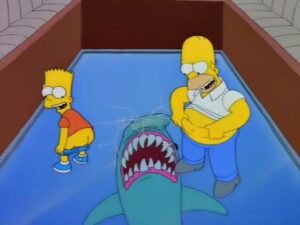 Now there are numerous theories about why exactly great white sharks fair so poorly in captivity with the leading one being that the shark is simply too fucking world-wide to be contained. No, really. You see great white sharks are migratory animals by nature and routinely travel hundreds of miles just to eat or get their fuck on with some great whites literally swimming to the other side of the planet just to see whats going on. Because of this housing a great white shark is believed to be unfeasible if not outright impossible to such an extent most aquariums on Earth refuse to even try any more. Which we’re going to frame as a victory for the shark. Because it’s funny and because we can.