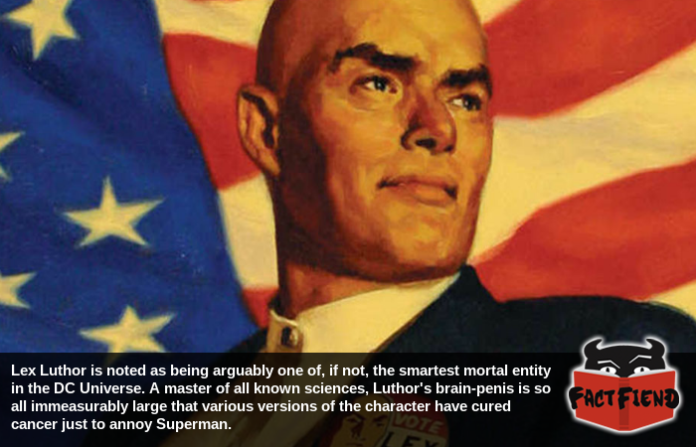 Lex Luthor is a comic book character defined by two things, his intellect and his bald-ass head. In regards to the former, Luthor’s mind is so keen that various iterations of the character have straight up bragged about casually solving cancer.

As an idea of how impossibly smart Luthor is, the comics he hails from has established that he is considered a leading mind in every form of science known to man and several that he himself pioneered or invented, such as extra-dimensional travel and building giant lime-green battle-suits. 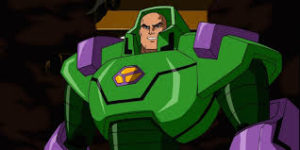 Considered peerless by human standards, in DC canon Luthor’s daunting intelligence is rivalled only by that of Brainiac, a DC supervillain who’s primary goal is downloading all of the information in the known universe into his massive green head. For non-comic fans, this means that the only comparable analogue to Luthor in terms of intelligence is a villain who is basically the giant floating brain from Futurama. 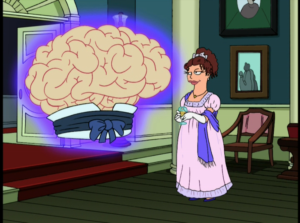 This being a character from a comic book, Luthor has of coursed showcased his intelligence in absurdly outlandish ways over the years. For example, Luthor routinely solves complex equations that have baffled experts for decades while musing over his morning coffee and is smart enough to disassemble alien machinery he’s never seen before in his mind to understand how it works and even make improvements to its design.

A cutthroat businessman as well as an intellectual powerhouse, Luthor is a veritable business titan in the DC universe, owning virtually every business in his native Metropolis as well as business holdings worldwide. Thanks to the immense wealth and influence afforded by owning basically an entire city, Luthor was also once able to become fucking president. Something he seemingly did as casually as he’s capable of curing all the cancer. 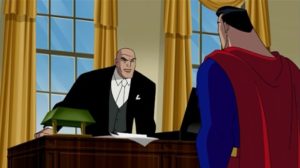 You see, in various comics, shows and movies Luthor has appeared in, the character has bragged about being able to cure cancer (or indeed any disease plaguing humanity) as easily as he mastered politics and thermodynamics. However, the character, being a big-dick businessman who only values consolidating his own power, he sees no value in doing this. As such, after curing a given disease, Luthor will usually then give the cure to his scientists and tell them to turn it into a lifetime treatment to make more money.

The only known exception to this is when someone decided to check Luthor’s massive, swollen ego. For example, in one comic Superman and Luthor are stood watching as a guy dies of turbo cancer, much to annoyance of Superman who asks why Luthor (who brags all the time about being smart as fuck) doesn’t step in and do something. 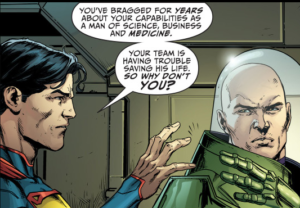 Luthor obviously doesn’t do anything at this point because he’s a huge dick, prompting Superman to change tactics and sarcastically chide Luthor by saying “well, unless you can’t”. A statement that annoys Luthor so much he steps in and cures cancer on the spot as Superman’s smug levels go off the charts. 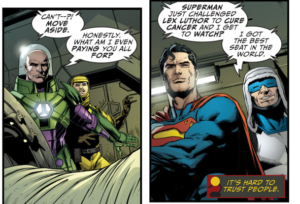