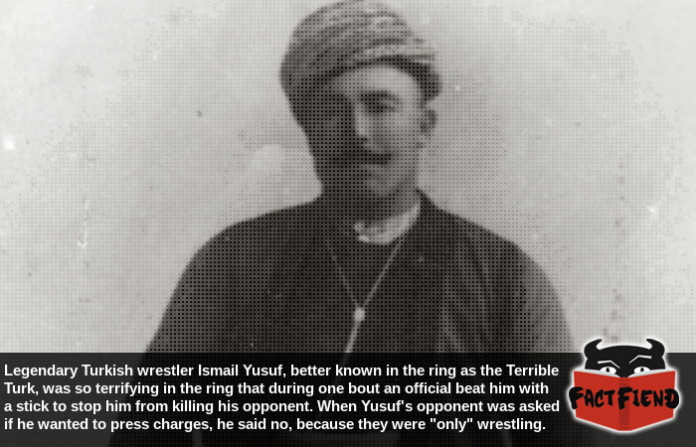 Some men have myths built around them. And some men are born mythical. Yusuf Ismail is the latter.

Ismail was part of the so-called “Turkish invasion” a group of Turkish wrestlers who, like the Avengers, were assembled for the sole reason of kicking ass. We know very little about Yusuf’s early life, literally one of the very first things ever recorded about him was him beating another wrestler in four seconds.

Yes, Yusuf’s childhood, his teenage years and presumably all the large, mustachioed Turkish men he punched in the gut on his way to being an unstoppable badass aren’t known, but considering how awesome his later life was, we wouldn’t be surprised if his childhood was composed entirely of leg locks and turnbuckle bashes.

Yusuf was first discovered by the wrestler Doublier, who, ashamed that he was defeated by a French wrestler known only as Sabès, went all the way to Turkey and brought back the three biggest wrestlers he could find to kick Sabès’ ass. One of these men was the 6’2″, 300-lb. master of Turkish oil wrestling, Yusuf Ismail.

When Sabès and Yusuf met in the ring, Sabès approached Yusuf from the front and went for a low grab, a mistake many men and bears would make in coming years, only for Yusuf to man through Sabès’s cheap shot to the balls (it was actually a belt hold, but everything below and above Yusuf’s belt was balls so we’re technically correct). While Sabès ineffectually grappled with Yusuf’s manhood, Yusuf gripped him by the throat and slammed him to the mat with such force he was instantly declared the winner. The whole match lasted four seconds, but Sabès’ shame lasted forever.

Yusuf then spent the next three years punching every French wrestler he could find, besting such awesomely named wrestlers as Tom Cannon and Paul Pons. After being soundly slapped upside the head by Yusuf, Cannon told Yusuf he’d find a wreslter to beat him. In response Yusuf calmly stated that if he was ever beaten he’d slit his own throat. Which we all know is a lie since knives, like everything else created by man, were terrified of fighting Yusuf.

Before this though, Yusuf challenged another Turk, called Ibrahim Mahmout. Their bout has gone down in history as one of the most brutal wrestling matches of all time. When Ibrahim refused to submit to Yusuf, enraged at the indignity of an opponent not exploding into a cloud of fear-piss, tore his nostrils, smashed a bunch of his ribs and twisted his arm all the way around till it clicked.

Thinking that Yusuf was going to straight up hate-murder Ibrahim in front of 80 witnesses, the referee tried beating Yusuf with a stick, when that didn’t work, it took the combined might of six people to tear Yusuf from his opponent. Angered even more at this affront to his honor, Yusuf took out three police officers before being arrested.

But here’s the badass part, when the police asked Ibrahim if he wanted to press charges against the man who’d just shattered six of his ribs, Ibrahim’s response was “Certainly not. We were only wrestling.” We’re assuming the three policeman Yusuf rag-dolled took one look at Ibrahim’s mangled body and agreed, yeah, threatening this guy is a bad idea.

After deciding that France held no challenge for him, Yusuf set his sights on America in 1897/8. Yusuf’s manager pitched him as the Terrible Turk, you’ve probably heard that nickname before, well we’re happy to tell you that Yusuf was the original Terrible Turk, making every Terrible Turk to come after him little more than a poser not fit to oil his manly mustache.

The challenge was simple: $100 to anyone who could last 15 minutes in the ring with him, Bonesaw style. That prize was never claimed. When famed catch wrestler George Bothner took up the attempt, Yusuf slammed him to the mat in a single move, stood on his chest, gave the audience a dirty look, then calmly walked out of the ring. When talking about the bout years later Bothner openly said he’d never fought someone as strong, or as terrifying as Yusuf.

Yusuf next smashed Ernest Roeber by punching him so hard he flew out of the ring and into the audience! Before dominating Evan “The Strangler” Lewis by simply being too buff for Lewis to strangle.

After the latter, Yusuf insisted that his $5000 prize money be paid to him in solid gold. Since this was a demand from the goddamn Terrible Turk, the request was of course met immediately. Ironically, this became his downfall. On his trip back to France, the boat Yusuf was on began to sink–whether or not this was due to the weight of Yusuf’s balls isn’t known, but we’re going to assume it was.

Now considering everything else you’ve read about Yusuf, he reacted to his boat sinking exactly the way you’d expect, by punching every person in his way while holding a dagger and wearing long flowing robes as he sprinted for the lifeboats. Upon seeing that a lifeboat was already in the water, the 300-lb. Yusuf leapt from the boat into the lifeboat, capsizing it. Now we should point out Yusuf was an amazing swimmer, as you’d expect since swimming is basically wrestling the water; however, the weight of the gold dragged him down and he drowned.

Thus ended the career of the Terrible Turk, a man so scary God had to ask Poseidon to take him out when he was flailing for his life.