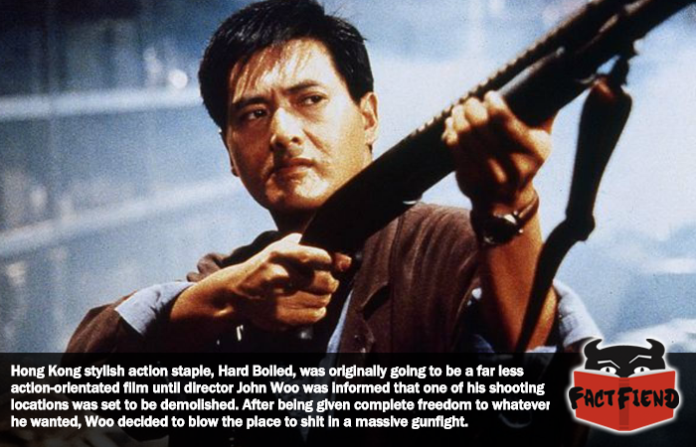 If you’ve ever seen a character in a movie dive through the air while firing multiple handguns at once, there’s a good chance that scene was either directed or inspired by John Woo. An action director so beloved for his commitment to stylish over-the-top gun-fu, Hong Kong let him do whatever the fuck he wanted to when making movies.

A veritable titan of the movie industry, Woo is well known for pioneering things that are considered cliches of the action genre today like excessive use of slow motion and two guys in cool suits dramatically pointing guns at each others face. 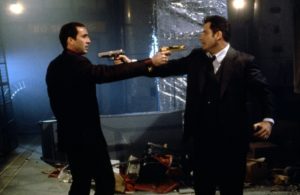 Considered one of the most influential directors in the field of action cinema, Woo loves putting impossibly cool shit into his movies to such an extent he is seemingly incapable of directing a movie that doesn’t contain at least one shootout. We say this because one of Woo’s most well known action movies, Hard Boiled, was originally supposed to be a drama focused thriller.

The thing is though, after deciding that he wanted Hard Boiled to be a more subdued affair compared to his previous movies, the style gods seemingly had other ideas. For example at the start of production, Woo learned that the Wyndham Teahouse (a popular and famous Hong Kong landmark) was due to be demolished. Not liking that one bit, Woo applied for permission to film there, ostensibly to immortalise the building by having it appear in one of his films.

Woo’s desire to create a more serious, gritty movie was quickly dick-punched by the part of his brain that came up with cool shit when he laid eyes on a large banister that cut through the centre of the teahouse. According to Woo, the moment he saw the banister he decided there and then that the focal point of the scene they were going to film there would be a guy sliding down it while firing two guns at once.

While admittedly not something you’d usually see in a serious thriller movie, what really made Woo decide “screw this lame crime drama stuff” and go fucking in on the hyper-stylish gun fu the film is famous for was when he mentioned that the scene might result in some damage might be done to the teahouse to the local government and they told him that they didn’t give a shit. It was going to be demolished after all.

Upon realising that he was basically being given a blank cheque to do whatever the he wanted without consequence, Woo went back and choreographed a 5 minute long shootout that involved the shooting of hundreds of blanks and the destruction of almost every room in the teahouse. But here’s where the story gets hilarious because after shooting began on the scene, the Hong Kong police and fire department were flooded with complaints from people living nearby about the noise caused by filming the scene. Which is understandable given that it involved nothing but firing guns and that it was filmed exclusively at 2 in the morning.

According to Woo, the complaints were ultimately ignored by the police when they came to tell him to be quiet and realised that the noise was being caused by filming for a John Woo movie about a badass police officer with a three ton penis. The same is true of firemen who turned up to answer noise complaints, all of whom ended up leaving without doing a damn thing after realising John Fucking Woo was the one making it. Hell, there are even rumours that gangsters who tried extorting the crew for protection money ended up leaving production alone when word reached them that it was a John Woo movie. As if this wasn’t enough to make you think that the entire world was conspiring against Woo to nudge him towards turning Hard Boiled into another balls-to-the-wall action flick, we should point out all this happened before he even finished writing the fucking script.

As you’ve probably guessed, Woo did end up shifting focus to make Hard Boiled more stylish, which explains why the last 45 minutes of the movie involves the main character doing nothing but shoot people in the dick.